Final Showdown (ベイブレード, よ永遠に!, Beyblade, till Eternity!) is the fifty-first and final episode of Beyblade: 2000.

Inside the ice formation, Tala tells Tyson they have warped into another dimension. Tala continues to beat back Tyson, who is growing weaker from the cold. All the Bit-Beasts Tala had collected, including the members of the Bladebreakers come out and continue to pulverize Dragoon. The members of Tyson's team try to encourage him, but their voices don't reach him, as Tyson sinks to his knees, shivering. Tala uses a combined attack with all the stolen bit-beasts that attacks both Dragoon and Tyson. Tyson's blade stops spinning after the attack. Tala wins the second round, leading to a tie. Judy says that it is over for Tyson. Not only is he battling the elements, but also Tala. The only way he can win, is through a miracle, or the Bit-Beasts. Tyson's teammates, however, refuse to give up on him.

The third round begins. Tyson says that Tala is right, he can't win, but yet he is smiling with a look of confidence on his face, leaving Tala to wonder what he meant. Meanwhile, Judy is telling the Majestics and Kevin that they're the only ones left with Bit-Beasts, and if Tyson loses, it's up to them to stop the Demolition Boys. Robert agrees, but he encourages her to not give up on Tyson. Tyson tells Tala he can still win because Beyblading is about passion, and even though Tala's Bey is much stronger than his, Tala lacks the passion for the sport. Tala angrily states that he will show Tyson that pure power will win in the end, and calls his ultimate track again. Tala laughs maniacally as a giant ball of fire appears above his head. He explains, saying that when all his Bit-Beasts combine, it creates the ultimate weapon and there is no known defense against it. The crowd is shocked at this. The attack hits Tyson's Bey and Tyson himself.

Just as Voltaire was leaving his seat to congratulate Tala on his victory, the light fades from the viewing screen to reveal Tyson, alive, and Dragoon, still spinning. Tyson calls forth his bit-beast to the shock of Tala, who believes Bit-Beasts coming back are impossible. Dragoon speaks to Tyson's mind, acting that he returned because Tyson never lost hope, and as long as Tyson believes in Dragoon, Dragoon will never abandon him. Dragoon and Wolborg clash once more, each powered by their Bit-Beasts. Tala exclaims that this is impossible and that his Bit-Beast should have taken care of him long ago, and doesn't understand why Tyson and Dragoon can continue. Kai answers, saying that it's because Tyson and Dragoon work as a team, that Tala is taking them all on, and their blading is about working together, not just power, and that they are all one. Tala says that this game is where only the strong survive, and he's the strongest around. Tala roars, as his Bey collides with Tyson's. Dragoon slowly begins to push Wolborg back, faster and faster, and collides with the fireball, exploding it into a large ball of light and breaking the iceberg the two boys were trapped in. Lights shoot round the stadium as the stolen bit-beasts are liberated and returned to their rightful owners. Wolborg slowly stops spinning and falls over, crowning Tyson the winner of the World Beyblading Championships.

The crowd goes wild as Tala wonders how he could possibly have lost. Tyson walks over to Tala and compliments him on his fighting, and asks him to shake his hand. Tala looks surprised, then smiles and shakes Tyson's hand. Voltaire learns that the Biovolt corporation is over. Meanwhile, Tyson and the others are celebrating.

Later, the group reflects on their journey. Tyson's grandfather appears and congratulates him, but then says its time Tyson goes back to sword-fighting. Kai stops him, saying he and Tyson have business to do and that he and Tyson are now competitors - rivals. The other members, as well as his friends, saying they want to take on the world champ as well. the episode ends with everyone saying '3..2...1... Let it rip!' as Tyson and the others launch their Beyblades. 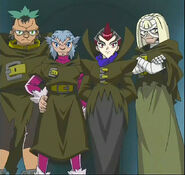 Add a photo to this gallery
Retrieved from "https://beyblade.fandom.com/wiki/Beyblade_-_Episode_51?oldid=430454"
Community content is available under CC-BY-SA unless otherwise noted.