The manga serves as a "what if" and is headed by female counterparts to the Bladebreakers. Though most other Bitbeasts and their blades also appear, they are not necessarily used by female bladers and only the Bladebreakers have a female counterpart. As such, the manga has influence from Shōjo based instead of Shōnen manga themes. The main protagonist is Tatsumiya Ryou, a 10 year old girl who can best all the boys at her school in Beyblade. The overall setting of the manga instead of tournament based like Bakuten Shoot Beyblade has a elementary school setting.

It was aimed at girls who were into Beyblade, Beyblade itself was mostly a game aimed at males as seen in Bakuten Shoot Beyblade. It served as a introduction for girls into the Beyblade game. To date, is the only part of the Beyblade franchise which has specifically been released to cater for girls instead of boys.

The Bit-Beasts have the ability to talk to their bladers.

Each chapter is given the name "Battle..." then a number and who was the subject of the chapter's battle.

The story is about a dark beast entering and influencing Bladers, the four sacred beasts sense it and leave to influence a blader each who will fight against the upcoming threat. Ryou finds Dragoon takes residence in her beyblade and begins to help her in her battles by giving her advice and explains why it is her.

Their first foe uses Trypio, Ryou witnesses the impact the dark beast has on the bladder's as their eyes change colour to show the influence. During the fight, the beast attempts to stab Ryou with its tail but Dragoon grabs the stinger and breaks it with it's mouth. After defeating Trypio's blader, Dragoon has words with the beast, lecturing it on its actions which cause the beast to feel guilty. At the same time, Ryou has words with its blader.

Ōtori Asuka looks on, having witnessed the battle. Dragon updates Ryou after the battle, telling it about the other 3 sacred beasts and its friends.

Ryou is seen blading later against other kids, when another dark blader comes along with the beast Galzzly. The dark beast almost wins when Torakiba Mitora wielding Driger appears.

Dragoon and Ryou reflect on the appearance of Driger and Mitora. The next blader that appears commands Seaborg. Seaborg scratches the bladers face, harming them. During the battle once again Mitora appears and helps the fight; only to scratch up Dragoon using Driger's claws. As the fight continues, Ryou gets angry at Seaborg and punches it for using a blader to do its bidding. After saving its blader, Seaborg is zapped with Dragoon's thunder. After the battle Seaborg's blader and Ryou become friends.

Ryou gets word of a blader breaking other peoples' bladers and rushes to find all her friends blades have been smashed, with the only clue being a feather. Upon exploration she find Ōtori Asuka crying. As she explains that she doesn't want to do this, the dark beast takes over her and she pulls out her Beyblade, revealing she is controlling Dranzer. Dranzer is being forced to fight and doesn't want to do what Asuka commands it to do. Dranzer and Dragoon fight, the dark beast talks through Dranzer. Dragoon and Ryou defeat the beast and blader.

The Dark beast reports to its bladers, including Mitora and Galmon's on the situation. Mitora joins Ryou's school as a new student. Later she reveals her strength as a blader, Ryou finds herself fighting both Mitora and the blader for Galmon. During the battle the dark beast takes over Galmon's blader. As Galmon pulls off its special move, Driger is hurt and decides not to side with the darkbeast. Galmon is defeated.

Ryou returns to give Dranzer back to Asuka , despite her protests against blading again after being controlled by the dark beast. Ryou later is bondering on where Dracel is, when a scream alerts her, she rushes to find Asuka is having problems with Yuyama Sesee her teacher, the pair are attacked by a blader handling Galeon who has been taken over by the Dark Beast. Yuyama Sesee reveals he currently has Dracel and uses it to protect her from Galeon's attack. During the fight, Asuka tries to run away, but Ryou stops her and show her how Yuyama Sesee is protecting them right now. As Dranzer is summoned and powered by Asuka, Mitora emerges and having a victory the 3 celebrate agreeing to work together.

At this point Wyborg attacks. Wyborg is defeated and the 4 later appear together noting how their blades are together and this makes them unstoppable.

At this point, Wolborg appears and attacks, freezing the beasts. The dark beast appears and the 4 sacred beast rise up against it, winning.

Griffolyon attacks the school with its blader. With much struggling Dragoon defeats the blader and the dark beast leaves Griffolyon's balder. A piece of a emblem appears.

Later Ryou finds out Yuyama Sesee has received an arm injury and can no longer blade, Dracel is also gone from his blade. This prevents the 4 sacred beasts power. The blader responsible is a large blader controlling Salamalyon. The two fight, with Dragoon eventually coming out on top.

Ryou spots Asuka, but the girl responds. Just then, Asuka appears and Ryou is confused as to how there could be two of them. Asuka reveals the girl isn't her look alike girl pulls out Sharkrash, turns out Ryou told her things she was after and attacks her twin. Dranzer and Dragoon fight against the Sharkrash blade, with the dark beast taking over the blader. The two eventually defeat Sharkrash and its blader.

Vanishing Moot and Vortex Ape are seen being commanded to prepare for battle as the dark beast reveals he has captured Mitora. Yuyama Gesoki appears with Dracel and she challenges Ryou, revealing she is Sesee's little cousin. During the fight Flash Leopard appears. Draceil and Dragon are surrounded by strange dragon-like heads. Flash Leopard is defeated during the fight and later the two sacred beasts are seen sparring against each other.

Later the blader for Flash Leopard appears and once again Dragoon is challenged. The defeat of Flash Leopard strains Ryou and she is injuryed in the fight, but she manages to struggle on.

When Ryuto and Asuka attempt toe rescue Mitora, they are attacked by a blader using Vortex Ape. Driger's blader is struck, Vanishing Moot is also under this bladder's control. They manage to free Mitora and attack. They defeat the blader of the two bit beasts. The last piece of the emblem is found giving the girls the ability to face the dark beast.

They are joined by Yuyama Gesoki and take on the dark beast. During the fight it captures the 4 sacred beasts, devouring them it transforms into its true form of Nightmare Dragoon. However the main head is attacked by its other 4 heads, as the 4 beasts take over parts of Nightmare Dragoon. The four girls hold arms and start spinning, attacking like a Beyblade.

When the girls recover, they find all the beasts are gone including their sacred 4 bitbeasts. The girls continue to Beyblade on. 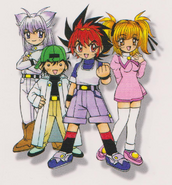 Nightmare Dragoon appears
Add a photo to this gallery
Retrieved from "https://beyblade.fandom.com/wiki/Beyblade_Battle_Saint_Lolita?oldid=424377"
Community content is available under CC-BY-SA unless otherwise noted.