"Flare of Tyranny: Lean!" (暴虐の炎 レーン！！, Bōgyaku no Honō Rēn!!)​ is the twentieth episode of the Beyblade Burst Superking anime and first aired on August 7th, 2020 in Japan.

Hyuga and Hikaru finally encounter Drum who happened to come to the Asahi restaurant for dinner. They challenge him to a battle immediately. First off, a head-to-head competition between the attack type bladers Hyuga and Drum! The two spirits keep clashing as the battle continues. Meanwhile, Ranjiro pays Lean a visit...

In an abandoned factory, Ranjiro challenges Lean to confirm his abilities to beat Free and Lui. Although Lean treated Ranjiro like he was under his level, he accepted the battle for practice. Lucifer and Lean attack Ragnaruk with overwhelming power and Ranjiro attacks back. "This isn't the end," says Ranjiro, who burns his fighting spirit even further under the ruthless gaze of Lean.

NOTE: A Japanese VPN is required to watch both of these episodes. 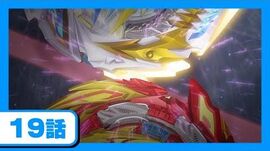 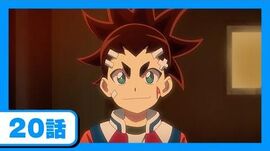 Retrieved from "https://beyblade.fandom.com/wiki/Beyblade_Burst_Surge_-_Episode_10?oldid=456462"
Community content is available under CC-BY-SA unless otherwise noted.