Part 1: The Legend Festival is finally here. The first stage that Hyuga, Hikaru, and Lean, the three from the new generation will have to face is a battle royale. 10 challengers are separated into group A and B, and the group A consist of Hikaru, Drum, Sisco, Lui, and Lean. Who will be the first winner in this historical festival!?

Part 2: Before group B's battle commences, Hyuga wants to get in some training and waits to battle Hikaru. But Aiger Akabane appears to not only help him in his training, even going as far as to tell him honestly of Achilles' features. Then the second fight of the battle royale starts. As the Legends attack and defend with no holding back, Hyperion plunges straight into the crossfire!!

NOTE: A Japanese VPN is required to watch these episodes. 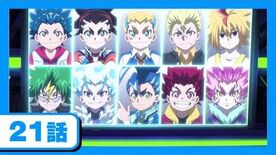 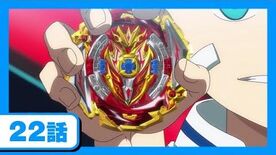 Retrieved from "https://beyblade.fandom.com/wiki/Beyblade_Burst_Surge_-_Episode_11?oldid=457304"
Community content is available under CC-BY-SA unless otherwise noted.