​"Hyuga & Lean vs. Hikaru & Aiga!" (ヒュウガ＆レーンVSヒカル＆アイガ！, Hyuga & Rēn VS Hikaru & Aiga!)​ is the twenty-third episode of the Beyblade Burst Superking anime and first aired on August 28th, 2020 in Japan.

"A God Battle of Friendship!" (友情の神（ゴッド）バトル！, Yūjō no Goddo Batoru!)​ is the twenty-fourth episode of the Beyblade Burst Superking anime and first aired on September 4th, 2020 in Japan.

Part 1: The Legend Festival's second stage is the tag battles! Ten contestants will switch teams on the way and fight two games each, and the top four players with the most points will advance to the final round. The first match of randomly formed tags is Hyuga & Lean vs. Hikaru & Aiga, a battle between the World Champion and three from the new generation! Hikaru, who is happy to partner with the person he adores, unites his feelings with Aiga to become a "strong and invincible blader." Meanwhile, Hyuga and Lean both target Achilles?!

Part 2: The second match of the tag battle will be a battle between Valt & Free VS Rantaro & Sisco, BC Sol's talented bladers! Hyuga and Hikaru, who accidentally stumble upon the practice room of Rantaro and Silas before the battle, listen to the bladers' conversation. There, the two hear that Silas has made an unseen effort to beat Valt and Free. The brothers begin to understand how much Sisco wants to win this. During the battle Valkyrie and Fafnir launch a coordinated attack, and are greeted by Satan who has a new deadly technique?!

NOTE: A Japanese VPN is required to watch both of these episodes. 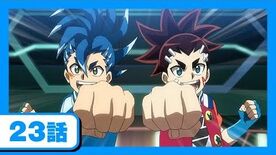 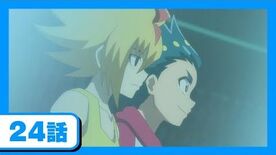 Retrieved from "https://beyblade.fandom.com/wiki/Beyblade_Burst_Surge_-_Episode_12?oldid=457265"
Community content is available under CC-BY-SA unless otherwise noted.