Beyblade Deck Attack & Defense Set is a Beyblade Set released by Takara Tomy. It focused on Attack and Defense combinations and was released on August 7, 2010 for approximately 2625 yen.

This Set was released after the Beyblade Deck Entry Set to further promote the Deck System which TAKARA-TOMY installed in their Asian WBBA tournaments. Generally, that system consists of choosing three combos before the beginning of a BeyBattle and sealing them in the Bey Deck Case. A different Beyblade must be selected for each match, and the Metal Wheels usually have to be different. It can even be required that the customizations be different types. All these rules explain the variety of parts in this product. Interestingly, Beyblades from the Beyblade Deck Attack & Defense Set were even used by characters in the Metal Fight Beyblade Baku anime, which is unusual.

While this Set has interesting recolours, it is only decent competitively. While all of the Metal Wheels are outclassed, Aquario and Escolpio are top-tier Clear Wheels for Defense and Attack, respectively. Moreover, RF and S130 also are top-tier Bottoms for Attack. 145 is decent for Stamina if better Tracks like W145 and AD145 are not available, and D is top-tier for Stamina as well. MB has also found a home in Balance Customizations, like the combo Duo Aquario 230 MB, even though it is only decent for Defense.

This Set does have top-tier parts, but you can get them in cheaper alternatives, especially since Hasbro released Poison Giraffe S130MB as a Starter. Overall, there is no need to purchase this Set outside of collection purposes.

Fromt of the box

Back of the box 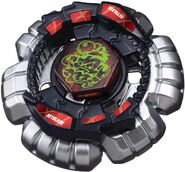 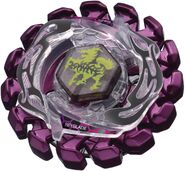 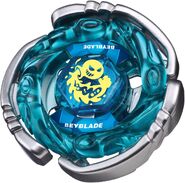