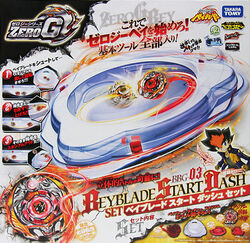 The Start Dash Set (Japanese: スタートダッシュセット) is the first Zero-G set produced by Takara Tomy, preceding the Synchrom Battle Set. It was released on March 31, 2012 for 2,625円 in Japan.

This Set constitutes a good introduction to Metal Fight Beyblade Zero-G. The Zero-G Stadium Attack Type is an excellent arena for the swaying gimmick of this system, but it can be found individually and the other types of Zero-G Stadiums make good alternatives, as opposed to the dominance the BeyStadium Attack Type imposes on all other stadiums released in Metal Fight Beyblade classic gameplay. Samurai Ifraid Burning Ver. offers an interesting recolour, and the majority of its parts have competitive use in Attack (Ifraid and CF), Zero-G Attack (CF) and Stamina (W145). Consequently, this Set should be purchased if found at a lower price than the sum of its contents' prices. 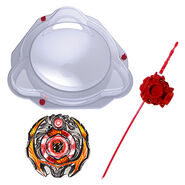 WBBA representative holding the set.
Add a photo to this gallery
Retrieved from "https://beyblade.fandom.com/wiki/Beyblade_Start_Dash_Set?oldid=312203"
Community content is available under CC-BY-SA unless otherwise noted.