The Beyblade Super Deck Set is a Beyblade Deck Set released by Takara Tomy as part of the Premium Returns series. It includes three Beyblades which were considered top-tier at the time along with a Metal Face Tool Assist. It was released on November 20, 2010 in Japan with the product number, BB-96.

The Beyblade Super Deck Set's purpose was to release combos that frequently placed among TAKARA-TOMY tournaments at the time of release. As such, it contains all re-released parts, but also allows an easier way to find relatively rare, competitive parts; most importantly, Libra. However, as great as the set was when it was released, not long after release, the Wheels all became outclassed–Pegasis by Wheels like Beat, and Libra/Burn by Basalt–with the advent of the Maximum Series and everything that followed in the 4D System. That said, this set does still contain numerous parts that have remained at least somewhat competitive to this day; like MF-H, 85, RF, 100, D, 90, and WD.

The Beyblade Super Deck Set is readily available, and the variety of useful parts do make it a worthwhile purchase if you need them all, but for any Blader getting started with competitive battling, there are newer sets available (like the Strongest Blader Set or Beyblade Ultimate DX Set) which provide a better base to build from. 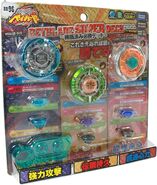 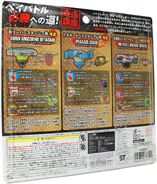