Beyblade Team Packs are sets that come with a Metal Masters' teams' Beyblades.

It comes with three Beyblades, two launchers with the team's logo on it, and three codes.

It has two launchers with the GanGan Galaxy logo stickers on them.

The StarBreaker team consists of Zeo Abyss, Damian Hart, and the mysterious Jack.

This pack comes with Flame Byxis 230WD, Evil Befall UW145EWD, and Hades Kerbecs BD145DS.(Note: the facebolt of Befall will break after a lot of uses, same with the BD145.)

Comes with two launchers with Star Breaker logo stickers on them. 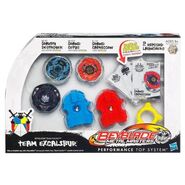 Team Excalibur Team Pack
Add a photo to this gallery
Retrieved from "https://beyblade.fandom.com/wiki/Beyblade_Team_Packs?oldid=246316"
Community content is available under CC-BY-SA unless otherwise noted.