The BEYBLADE World Championship (formely known as the BEYBLADE National Championship) is a recent worldwide Beyblade championship that first launched in 2011. It concluded on Sunday, March 25, 2012 at Corus Quay in Toronto, Canada.

While similar to the previous world championship held in 2004, it was based off of the Metal Saga while following the same general format. Bladers from countries all over the world compete in various tournaments and the winning Bladers becomes the representative of their aforementioned country. They were then sent to one location, Toronto in Canada, where the No. 1 Blader in the world was crowned.

The world championship was announced on March 22, 2011 by The Wall Street Journal in a post provided by Alexandra Cheney; published at 10:00 P.M. EST. One such paragraph, included this information.

As time passed, more information surfaced, such as one instance where Hasbro has said and quote, "players will have the oppurtunity to compete head-to-head against the greatest Beybladers from around the world in the premiere World BEYBLADE Championship! A series of local BEYBLADE tournaments in each market and virtual battles in BeybladeBattles.com will test players' skills and strategy as they represent their region in this unique global competition."

According to The Wall Street Journal, 40 countries would be participating and 10 winners will be sent to Toronto at Corus Quay on March 23, 2012; to face off and battle to become the best Beyblader in the world. The 10 winners would be changed to accomodate 25 winners to face off in the final battle, as well as move the event from March 23rd to March 25th.

During the course of the tournaments, parts that were not yet released outside of Asia were banned. At the time, it was the then-new 4D System. At the championship, red BeyLaunchers, or String Launchers, were also given or lent to players from outside Asia to even out the battles, since Hasbro had failed to make this must-have powerful launcher widely available.

Louisville Kentucky on September 12, at Target

The only notable rule for all the Beyblade World Championships including all the qualifier events was that 4D Beyblades were completely prohibited, in order to be fair with all the countries who only had Hasbro's Beyblades. Hasbro's release of Beyblade: Metal Fury, their version of Metal Fight Beyblade 4D, was set several months after the World Championship.

Each competitor had to choose only three Beyblades before even entering the play area with the stadiums. The Beyblades wereinspected and even disassembled by TAKARA-TOMY staff before the player could enter the field of play. Each combo had to use different Metal Wheels.

Matches were best-out-of-three, so the first to two wins. Ties were not replayed, therefore, since they counted, it was possible to get two ties, and then win the whole match with just one victory.

For Hasbro's Striker Stadium, the two pockets were counted as knock-out areas, unlike their usual regulations.

There were several rounds to the World Championship, each with the goal of eliminating Bladers to only get the very best champions for the finals.

This round was conducted exclusively in Hasbro's Striker Stadium, and all the participants were given a Striker Stadium to practice with before the day of the World Championship. Since the battles consisted almost entirely of stamina duels in those stadiums, each round ended up being way behind schedule.

This round also used only Hasbro's Striker Stadium.

The first parts of the elimination used TAKARA-TOMY's BeyStadium Attack Type, while the Finals were conducted in TAKARA-TOMY's Tornado BeyStadium, which was used frequently in Asian WBBA tournaments.

Here are the top placements, followed by a more detailed schema to illustrate the way the World Championship happened:

In this round, the following Bladers were eliminated: Kristofers, Dheeran, Marco, Mauricio, Jason, Simon, Robbe, Jack, and Rueben.

In this round, the following competitors were eliminated: Hamza, Gal, Yassin, Aleksandar, Pattara, Luqman, Muhammad, Vladislav. 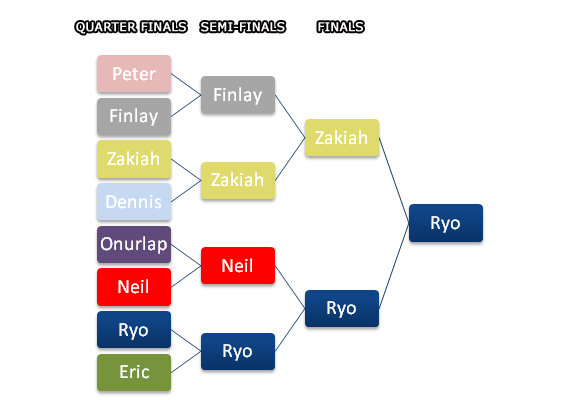 A number of important figures were invited and present at the World Championship, both from the Beyblade world and less related to it.

The crowd at the World Championship consisted mostly of the representatives' parents, siblings and cousins. However, some spectators also owned special passes to get into the venue. On February 25th, 2012, a tournament event was held in every Toys "R" Us across the country of Canada, and the winners were entered in a random draw to get the special prize of a free travel to the Beyblade World Championships in Toronto, but it remains unknown how all those other people got an entry pass to watch the championships at the Corus Quay.

Hasbro chose representatives for some of the biggest countries, notably Canada and Australia, in a way that is completely unrelated to actual Beyblading, and as such, it created a major upset in the Beyblade community. Other qualifiers were advertised so poorly that they went by without anybody noticing except a small group of Bladers, which was the case for the United Kingdom, another hotspot for Beyblade activity.

Besides the methods of selection, the actual Beyblade World Championship happened relatively well. The structure with the pool plays was judged to be very reasonable, although the choice of stadiums was quite debated. For instance, everyone was given a Striker Stadium to practice for the first round, which was fair, but the Finals were done in a Tornado BeyStadium, which few people except the Asian representatives had practiced in before.

One of the negative highlights of the event pertains to the fact that it was supposed to be livestreamed. The live recording malfunctioned several times and, in general, only approximately an hour and a half of the whole six-seven hours the Beyblade World Championship took could be viewed from anywhere around the world live. Beyblade fans were not warned that the livestreaming was not supposed to be continuous until in the middle of the Championship.

Retrieved from "https://beyblade.fandom.com/wiki/Beyblade_World_Championship_2012?oldid=313123"
Community content is available under CC-BY-SA unless otherwise noted.