The Beylocker is a Beyblade carrying case that can store up to ten Beyblades and five-piece beys that have been unasembled. It comes with an Evil Gemios DF145FS. It also comes with a Ripcord Launcher, Assembly Tool, and custom stickers of Galaxy Pegasus, Gravity Destroyer, Meteo L-Drago , and Ray Striker. It was released on July 2011 by Hasbro. A brand-new version of the beylocker is the same but a blue lid instead of red. It comes with Ray Gil, Grand Cetus, Rock Zurafa and Cyclone Herculeo face bolt stickers. It comes with Grand Cetus T125RS . It was released sometime in November 2011. It was also rereleased in Metal Fury with Torch Aries 125D. 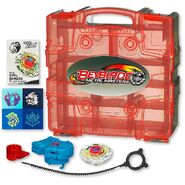 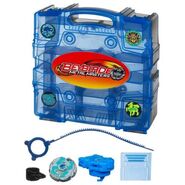 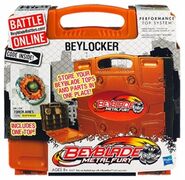 Add a photo to this gallery
Retrieved from "https://beyblade.fandom.com/wiki/Beylocker?oldid=240279"
Community content is available under CC-BY-SA unless otherwise noted.