The Battle of Beyster Island
The Unseen Opponent

The Beyster Island Championships (ベイスター島チャンピオンシップ Beisutā Tō Chanpionshippu) was a tournament that took place near the end of Beyblade: Metal Fury.

A goal is set up at the top of the mountain and the race begins when Bladers arrive at one of the many stadiums installed on the mountains. Only the winning Blader of each battle is allowed to advance forward. The final battle will begin with the two people that arrive at the summit the earliest.

At the beginning, in order to confirm whether the Legendary Blader who governs another season of the Four Seasons is, Masamune, Gingka and his friends participate in the "Beyster Island Championships". However, Johannes and the others also do the same thing. Ryuga also arrives via a scarlet thunderbolt for the same reason. Gingka spots a Blader with an exact resemblance to Kenta in a brown cloak and hat and follows him with Yuki in tow. Fierce battles commence at each place at the beginning of the tournament. Starting with Gingka, Yuki and Benkei and the others smoothly win and advance to the next round as well. And importantly, Masamune clashes with Bao of the Beylin Fist. Furthermore, at a different location, Aguma and King collide, it's a showdown of Solar System Beys. But, as all these battles are happening, Gingka is looking for Kenta. Back to the battles of Aguma and King, they use their best they have to offer and Aguma loses after a hard match, however Masamune defeats Bao quite easily.

Battles unfold at each location of Beystar Island. Ryuga raises his Dragon aura, and draws closer to the leading group at a terrifying speed despite being the last entrant. However, King is interested in that strength, and personally challenges him to a match. Meanwhile, Gingka chases after Kenta and heads onto a ferry anchored at a lake. The joy of their reunion is cut short, so Kenta, who is awaiting him, challenges Gingka to a match. Having accepted the match in recognition of Kenta's seriousness, Gingka is surprised at the fact that Flame Sagittario C145S has become much stronger than before. He even managed to acquire a new special move. Meanwhile, Ryuga seems to be winning but King doesn't give up. He gains momentum and the fight continues. It seemed like King was going to win but Ryuga beat him. Gingka defeats Kenta and Ryuga defeats King in the two awesome matches that both ended in a huge bang. So both Gingka and Ryuga advance to the next round.

As the Beyster Island Tournament comes to a close, Toby and Zeo find themselves defeated at the hands of a mysterious Blader who doesn't show his face. Masamune arrives and hears the story; he is determined to battle this Blader at the final stage and runs full speed to it. Shortly, he discovers the final stage and ends up battling a Blader who goes by the name of Chris, and his Bey Phantom Orion B:D. The battle is tough; Masamune fights with all his might and hits Orion high up in the air using his special move, but amazingly, his Bey takes no damage at all. He is then surrounded by Legend power and uses his special move Barnard's Loop, which knocks Masamune and Striker out and Chris is revealed as another Legendary Blader by Gingka and company.

After defeating Masamune at the final stage, Chris is suddenly possessed by a darker attitude. Gingka and the gang try to befriend him, but he replies coldly, saying that he's a blader for hire and will only side with them if he is paid. Johannes steps in to try and recruit Chris to the Dark Side by offering to grant him any wish, but both Gingka and Ryuga refuse to allow it to happen. They don't have much time to argue, though, as King erupts in anger responding to Chris's insults directed towards a hurt and defeated Masamune. King launches Variares, starting a battle of massive proportion begins between the Legendary Bladers and the Nemesis Bladers. Johannes manages to escape when Aguma uses his power to disappear with the rest after L-Drago nearly defeats Orion. Gingka and the others feel defeated, as they had just lost the final Four Season Blader, and the only hope of creating Zeus's Barrier. At the end, Pluto sucks the energy out of Dynamis and turns him into Dark Dynamis using the curse of Hades.

Orion has been sent flying by Striker. 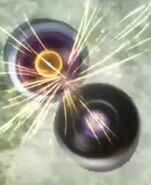 Aguma and Bao are confronted by Yuki, Zeo, and Toby.

Kenta and Gingka face off.