This Dragoon V2 alternative base is a special blade base that appeared in the last battles of the anime Beyblade: V-Force.

Kenny gave Tyson this modified base for use in the two battles of the second world championship.

Assumedly this blade base weighs more and gives the beyblade more power.

The base is featured on the Dragoon V2 remote control version. It should be noted that while the Takara version features the yellow tip, the Hasbro version has a white tip.

It seems to have a second weight disk and a plain yellow tip, may be a rubber one.

If that deduction is correct, this blade may have an excelent rotation on beystadium, just like all Dragoon Beyblades

There are very few clear shots of the base and the only ones available are when the beyblade is spinning. 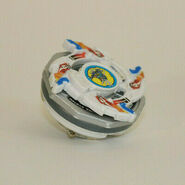 RA-01 RC Dragoon V2, based on the final V-Force revision of Tyson's Beyblade
Community content is available under CC-BY-SA unless otherwise noted.
Advertisement