Blader DJ is the Japanese Referee from the Metal Saga.

Blader DJ appears exactly the same throughout the Metal Saga. He has a signature appearance where he wears his reddish-orange bandana over his light brown hair. He wears a symbolic blue WBBA shirt covered by a vest. He wears Beyblade gear including elbow pads, gloves, cargo pants, and boots. Like Blader DJ from the original series, he is based on the real life Blader DJ.

Blader DJ appeared throughout smaller tournaments leading up to battle Bladers, as well as the official matches of Battle Bladers. Blader DJ also had several interactions with the Bladers themselves.

Blader DJ appeared in Metal Masters first commentating on the matches for the qualifying rounds of the Japanese representational team. Afterwards Blader DJ traveled to America to commentate on the final match of The World Championships. In America he met his past rival, the American DJ. He and and the American DJ Beybattled to a draw due to both of their horrible Beyblade skills. Afterwards, they became friends and commentated on the final match together.

Blader DJ first announced a mini-tournament in which Kenta won. Then, he was the DJ of the Beyster Island Tournament because the island didn't have its own announcer. He also minorly announced Gingka's final battle with Nemesis. 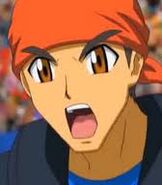