Blader Guy (Japanese: Buredagaiブレーダーガイ) is a recurring character in the anime and manga series, Beyblade: Shogun Steel. He announces the tournaments and events, succeeding Blader DJ before him.

Blader Guy wears a white jacket that has some red and black lines, a turned cap with red framed goggles, a red collar with a blue circle, a black shirt under his jacket, black gloves, light brown hair and blue eyes.He looks cheerful announcing the tournaments, and is always ready to see good battles.

Blader Guy made his Debut in Showdown! Revenge Match as the announcer for the 1-Day Tournament. Gai is later seen announcing the Neo Battle Bladers.

Blader Guy with Zyro and Shinobu in the finals

Blader Guy happy for the finals 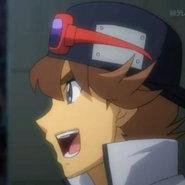 Blader Guy with Benkei
Add a photo to this gallery

Retrieved from "https://beyblade.fandom.com/wiki/Blader_Guy?oldid=315279"
Community content is available under CC-BY-SA unless otherwise noted.