Blindt has shown to be very passionate about Delta's power in the past ; as shown as he painted Devolos indicating that Delta has amazing within him and Blindt was very eager to see all of it. Hence why he drew out their battle together to make it his own art.

Blindt has become fascinated by Arthur's dark personality so he joined HELL in order to become stronger. 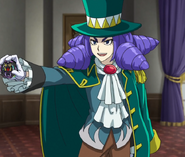 Blindt painting a picture
Add a photo to this gallery

Retrieved from "https://beyblade.fandom.com/wiki/Blindt_DeVoy?oldid=424513"
Community content is available under CC-BY-SA unless otherwise noted.