View source
watch 01:36
We're Getting Mutants in the MCU - The Loop
Do you like this video?
Play Sound

The New Striker is Complete!

Blitz Striker 100RSF, known as Blitz Unicorno 100RSF (ブリッツユニコルノ100RSF, Burittsu Yunikoruno 100RSF) in Japan, is an Attack Type Beyblade that appears in the anime and manga series Beyblade: Metal Fury. It is Masamune Kadoya's second Beyblade and the evolution of Ray Striker D125CS. It was released by Takara Tomy in the Strongest Blader Set on August 6, 2011 in Japan. It was later released in western countries by Hasbro as a Spark FX Starter Pack in February 2013.

The Face Bolt depicts "Monoceros", one of the 88 constellations in space. Monoceros is Greek for "unicorn". The design resembles the original Striker I Face Bolt, but with a more jagged mane design.

Striker II resembles its predecessor Striker I, with a new purple horn design. The three horns are more elevated than those of Striker I, and heavier. The horns of Striker II are intended to align with three-wing Fusion Wheels such as the Blitz Fusion Wheel. Like other 4D Clear Wheels, Takara Tomy's release of Striker II contained trace amounts of iron powder, which was advertised to increase its weight. 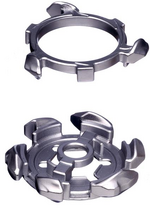 100 is the third lowest Spin Track available, but is outclassed in terms of Attack and Stamina by the even lower 85 and 90 Spin Tracks. 100 has no problem with floor scrapes, and while it is generally an outclassed part, it is still competitively viable, particularly in Attack customizations where it is able to make contact with opposing Beyblades.

Rubber Semi-Flat (RSF) is a SF tip made of rubber. It is essentially a flat tip with a smaller radius, giving it a firm, defensive grip on the stadium floor, but still allowing for a somewhat aggressive movement pattern with a proper launch. Its drawback is its weakness against opposite spin Beyblades, and its poor Stamina. Rubber Semi-Flat, like Rubber Spike (RS), suffers from poor Stamina, but the wider surface area of Rubber Semi-Flat results in better balance than the aforementioned Rubber Spike.

The blueprints for Blitz Striker.

Parts in the anime.

Blitz Striker shining after being assembled.

Blitz Striker spinning in a stadium.

Blitz moving at a high speed.

Blitz Striker and its Beast.

Blitz Striker on a Title Card for an episode.

A beaten Masamune with Striker.