Burn Phoenix 105F Blizzard Ver. (バーンフェニックスブリザードバージョン105F, Bān Fenikkusu Burizādo Bājon 105F) is an Attack Type Beyblade released as part of the Hybrid Wheel System. It was released by Takara Tomy and distributed by Mani Limited in Hong Kong through a DVD box set.

The Fireblaze Face Bolt depicts "Phoenix", one of the 88 constellations in space. The design features the flame-like head of a phoenix, along with the words "Phoenix" inside its beak. The original Takara Tomy release of Fireblaze features a tattooed Face Bolt, while Hasbro's Metal Fusion release is blank. The words "Phoenix" have also been removed on the Metal Fusion release. The Face Bolt in the Metal Masters re-released is identical to Takara Tomy's original release, while the Beyblade Legends re-release is a tattooed Face Bolt with the modified Hasbro design, albeit black instead of orange.

Fireblaze's design consists of the wings and tails of "Phoenix". Yellow details are painted on the wings, with black stickers applied on the tail feathers. Later releases of Fireblaze by Hasbro omit the yellow painted details.

Burn is an almost completely circular Fusion Wheel, interrupted only by two sets of wave-like ridges. The center of the Fusion Wheel features a flame pattern representing the sun, which complements the Fireblaze Energy Ring. Burn's predominant characteristic is its weight distribution. Its weight is concentrated on the edge of the Fusion Wheel, while the center is generally hollow and light. This produces what is known as the Flywheel Effect, which is the ability for a rotating object to increase its rotational velocity with the use of its own momentum.

The ridges are subject to some level of recoil, but are also capable of Smash Attack; however, the latter is not potent enough to be used effectively.

Burn was once the best Stamina Fusion Wheel, along with Metal System Virgo. However, it has since been outclassed by newer Fusion Wheels such as Scythe and Phantom, the latter sharing many characteristics with Burn itself.

105 is the fourth lowest Spin Track height available, but is outclassed in terms of Attack and Stamina by the 85, 90, and 100 Spin Tracks. 105 has no problem with floor scrapes, but is still an outclassed part and should only be chosen when none of the aforementioned Spin Tracks are available.

Flat (F), as the name implies, has a flat plastic tip, which gives it an offensive movement pattern. Flat has a hard time retaining a flower pattern due to it being made of plastic, which results in it having less grip to the stadium floor than a rubber Performance Tip such as Rubber Flat (RF). 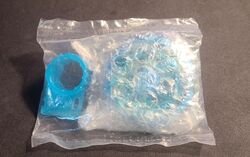 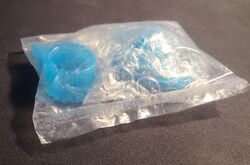