A Warrior Was Made!

The AR of Burning Kerberous is very unique in that each of its wings perform a different type of attack. The thickest wing performs Spike Attack, the next wing (clockwise) performs Upper Attack, and the wing counter-clockwise from the Spike Attack wing performs Force Smash. This AR can be used to differentiate between the different types of attack, but it is a jack of all trades and a master of none; it cannot be used in serious competitive play.

This is the prized part of Burning Kerberous. The Double Bearing Core contains two bearings (hence its name) and provides very good endurance. The tip is similar to the tip of Metal Change Base (Driger S); when the beyblade is shot at the center, the tip has very high endurance, and when the Beyblade is shot at an angle, the tip moves around in an attack pattern. The Beyblade also switches between attack and endurance during a battle. The bearing case can only hold one other shaft, Wolborg 2's shaft.

This combination provides great endurance. The AR, WD, and SP work in unison to spin steal effectively, while the Double Bearing Core provides the endurance.

This SP is used for smash attack, but it is not very efficient, due to the shape of the projections. Other SP parts outclass it, like Fin Tector (Draciel V2).

Blade Base (BB): Customize Bearing Base

This Blade Base can only house the Double Bearing Core. Only the shaft of Burning Kerberous and the shaft of Wolborg 2 can fit into the Double Bearing Core. Therefore, there are only two ways the BB can be used. The blade base can be used with the Burning Kerberous shaft inside the bearing cases, which has great endurance, or it can be used with the Wolborg 2 shaft, which stays fixed when placed in the BB. The Wolborg 2 shaft, when fixed in place, is used for attack combinations.

The excellent Casings and Shaft, solid Blade Base, useful if common Weight Disk and interesting if not quite competitive Attack Ring make Burning Kerberous a must-have for any serious competitor. All Bladers should own at least one copy of this Beyblade. 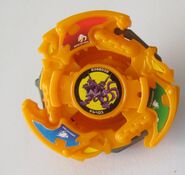 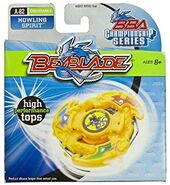 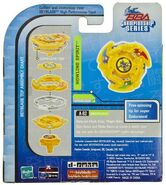 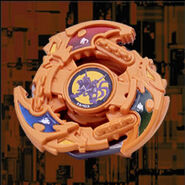 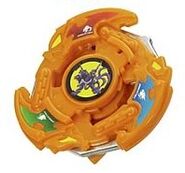 Customize Bearing Base inside view

Customize Bearing Base outside view