This article is about the Takara Tomy release. For the Hasbro release, see Turbo Spryzen S4 0Wall Zeta-S.

Cho-Z Spriggan 0Wall Zeta' (超Zスプリガン・ゼロウォール・ゼータダッシュ, Chō Z Supurigan Zero Uōru Zēta Dasshu) is a Balance Type Beyblade released by Takara Tomy as part of the Burst System as well as the Cho-Z Layer System. It was released in Japan on November 17th, 2018 for 5184円 as a part of the Cho-Z Customize Set. It is the evolution of Spriggan Requiem 0 Zeta.

Main article: Energy Layer - Cho-Z Spriggan
Takara Tomy's Cho-Z Spriggan is a Balance Type Energy Layer that features an overall round perimeter with large gaps and two heads, meant to represent the Layer's namesake; a Spriggan, a legendary beast of Cornish Faery Lore, and a large double bladed axe that goes from the center to the perimeter. As part of the Cho-Z Layer System, Cho-Z Spriggan features metal in its design; in this case, concentrated in the center in the form of a "Metal God Chip", akin to its predecessors Legend Spriggan and Spriggan Requiem. Cho-Z Spriggan also features gimmicks:

Like its predecessors, Legend Spriggan and Spriggan Requiem, Cho-Z Spriggan is a Dual-Spin Layer with two sets of teeth for Right-Spin Mode and Left-Spin Mode.

Like other Layers with the "Cho-Z" prefix, Cho-Z Spriggan features an anti-Bursting mechanism called the "Cho-Z Awakening System".

At high spin velocity, the centrifugal force activates a bistable mechanism, revealing sub wings called the "Cho-Z Wings" and in turn extending Burst-stopping tabs in the grooves meant to fit the prongs of the Disc. The Burst-stoppers then obstruct the Disc, preventing the loss of the last click and preventing the Cho-Z Spriggan Combination from Bursting. Due to the bistable mechanism the wings and tabs do not retract when spin speeds are low and must be manually pushed in after every match, the mechanism also allows the gimmick to work as intended.

Due to the Layer's Dual-Spin nature, there are two sets of "Cho-Z Wings" and only one set will activate for each spin direction as the starting position of the Disc will obstruct the other set. However, due to the bistable mechanism, Cho-Z Spriggan requires rather extreme spin speeds for the gimmick to activate which may be difficult for younger bladers.

While the blades of Cho-Z Spriggan in either spin direction are nearly identical to the blades of Legend Spriggan's Right-Spin Mode, Cho-Z Spriggan exhibits poor Attack potential. Due to the position of the "Cho-Z Awakening" gimmick, the blades are positioned on top of the Layer, and due to the Layer's thickness, the blades rarely, if ever, come into contact with the opponent. Furthermore, when the gimmick is activated, the "Cho-Z Wings" cover up half of the gaps between the blades, further reducing Attack potential.

As such, Cho-Z Spriggan is better suited for Spin-Equalization Combinations and, like its predecessor Spriggan Requiem, it is recommended to set the Layer to spin opposite to the opponent to maximize Defense and Stamina potential as there is too little recoil for Attack potential.

However, like its predecessors Legend Spriggan and Spriggan Requiem, in order to facilitate the Dual-Spin gimmick, two of the teeth on each set are made to the thickness of those found on Single Layers, meaning that the first two teeth on each set will wear down fairly quickly. Due to this, it is recommended to have multiple copies of this Layer and to be prepared to replace it or only use Drivers with weak spring locks like Bearing.

Main article: Forge Disc - 0
0 is a symmetrical Forge Disc that's elliptical in shape in order to facilitate a Disc Frame. Each side features one protrusion, each wide and smooth enough to almost make the Forge Disc perfectly circular if not for the notches needed to add a Disc Frame and a molded "0" on each side. The protrusions extend further and are thicker than most other Forge Discs which makes 0 the heaviest Forge Disc at the time of writing and implies high Outward Weight Distribution (OWD) and Stamina potential. In reality however, more weight is focused towards the center, which creates Centralized Weight Distribution (CWD) that reduces its Stamina to that of 2's. As such, 0 is outclassed by 7 for Stamina Combinations but 0's greater weight makes it ideal for Attack and Defense Combinations. Furthermore, the round shape of 0 creates high Life-After-Death, even without the use of Disc Frames such as Cross. While the weight can increase the risk of Bursts, the weight of most SwitchStrike/God Layers and Cho-Z Layers can compensate.

Main article: Disc Frame - Wall
Wall is a round, thick Frame with eight, large, downward protrusions. This makes Wall one of the largest and heaviest Frames in the game, heavier than Bump or Lift. While this may imply high Attack potential when paired with Core Discs such as 0, 10 or 00, Wall's size makes it a severe scrape and Stamina risk, making it difficult to achieve banking patterns and making Stationary Attack Combinations scrape even at relatively high spin velocities.

The Attack Setting features a rectangular flat tip, akin to Quake, albeit not slanted. Due to the surface area of this setting, Zeta' will create a highly aggressive movement pattern with high speeds akin to Quake, however the rectangular shape makes Zeta''s Attack Setting incapable of maintaining a Banking Pattern as the corners of the rectangular shape grind against the stadium floor. Furthermore, the same corners will grind against the Tornado Ridge causing a severe reduction in Stamina making the setting ill-suited for both Mobile Attack and Tornado Staller Combinations. Finally, without the slant in the tip, Zeta''s Attack Setting is incapable of hopping and potentially creating Disc-to-Layer contact like Quake, which was already inconsistent in the original.

The Stamina Setting features a flat tip with a small protrusion in the center, akin to Fusion. When launched parallel to the stadium, Zeta''s Stamina Setting will spin on the protrusion, creating a stable, Stamina-conserving spin. When knocked off balance by the opponent or launched at an angle, the flat tip will contact the stadium floor and create a movement pattern with the same speed as Accel before returning to balancing on the protrusion. While both Fusion and Accel have acceptable levels of Stamina due to their plastic construction, they lag behind Tips such as Survive, Revolve and Atomic due to the flat tip and the lack of a free-spinning component. While the Stamina Setting can create and maintain a Banking Pattern better than the Attack Setting due to the round shape, it lags behind Tips such as Accel and Xtreme due to the center protrusion which can also break the Banking Pattern.

Unlike its predecessor, Zeta' features a much thicker spring in its locking mechanism, increasing Zeta''s Burst resistance. 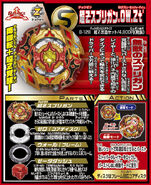 Cho-Z Spriggan destroyed
Add a photo to this gallery

Cho-Z Spriggan's avatar in the anime. (English Website)
Add a photo to this gallery

Retrieved from "https://beyblade.fandom.com/wiki/Cho-Z_Spriggan_0Wall_Zeta%27?oldid=425403"
Community content is available under CC-BY-SA unless otherwise noted.