Start a Wiki
Clay Wolf is a Beyblade used by an Akira in episode 19.

The Face Bolt on this Beyblade is Nothern Cross on a white background. There is nothing representing it, though it might represent someone going through a rough desert.

The original release of Wolf is a brown, translucent plastic wheel. The edges of the Clear Wheel consists of 4 wolf 'heads', one in each quarter of the clear wheel, representing the body form of a Wolf.

Clay is the Light Wheel equivalent of Rock. It has less stamina , and it is severely outclassed. It is very similar to Counter.

Not very special, but provides stamita to the bey. Makes the tip pretty unreachable. Sadly, outclassed by only 105 and 145 only.

HF is good in attack, but outclassed by many other flats. Yet, out of all the flats, this one lets wind travel through out the bey. It has better grip to the stadium, but grip out classed by Flat and Metal Flat. It yet has good stamita, but is outclassed by F and MF. 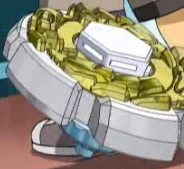 Clay Wolf stopped.
Add a photo to this gallery

Retrieved from "https://beyblade.fandom.com/wiki/Clay_Wolf?oldid=314484"
Community content is available under CC-BY-SA unless otherwise noted.