Counter Leone 145D is a Defense-type Legend Beyblade. It is a variation of Rock Leone 145WB and the "Legend" version of Leone 145D. It was re-released in a booster with new packaging without a Ripcord Launcher under Beyblade: Metal Masters. It was later re-released again in the Toys"R"Us exclusive "Sonic Series" with neon green recoloured parts, and came with a green Ripcord Launcher. This Bey was only released by Hasbro.

The Face on this Beyblade depicts Leo, one of the 88 constellations. It is also known as the greater lion. Its also the fifth astrological sign in the zodiac. The Metal Masters Leone face is lighter and not outlined, unlike the original Metal Fusion Leone face.

The Energy Ring is colored a dark green piece. Leone is very circular with small ridge details.There are 5 rectagular squares in a M shaped area. This energy ring is a metallic green shade. Leone is also a bit slanted and because of that can sometimes lower recoil when hit, and will do great with the customization Bakushin Leone X:D being capable to defeat Basalt Horogium 145WD and Diablo Nemesis X:D.

Counter is styled like a HWS version of the Metal System Leone. It possesses six similar mane-like projections that coronate its circumference. The gaps between the six projections are too large to provide consistent smash for a competitive Attack Customization. Counter still showcases fair Smash Attack, but unlike Leone, it lacks the same degree of recoil. This is because the projecting paws are more compact and rounded than its counterpart’s. The lower recoil makes it a better choice for a defensive combination.

145 is the forth highest Track available, next to 160, TH170 and 230, along with the various other 145-variants (C145, DF145, etc.). It can be used in Stamina customs to great effect due to its tall height, which allows for more wobbling as the Beyblade loses its spin velocity, but that being said, DF145 has this same effect but also the added bonus of its “Down Force” which while negligible, stabilizes the Beyblade it is being used on slightly. 145, being as tall, makes it easily susceptible to low Attackers; however, this should not be seen as a drawback because normally Stamina types are not used against Attack types. Like the Performance Tip it is pearly-white in color.

This is a Defense Bottom, which acts as a wider version of a Sharp tip. When hit by an opponent, a Beyblade with this Bottom will have lessened recoil and will recover from attacks more efficiently than a Sharp Tip. However, while recovering, the Defense Bottom will cause the Beyblade to lose some stamina, caused by the added friction. However it is easier to knock over than WD. This tip is a pearly-white colour. 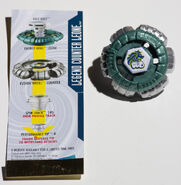 leo the lion or leone based on LEO constellation .
Add a photo to this gallery

Retrieved from "https://beyblade.fandom.com/wiki/Counter_Leone_145D?oldid=357087"
Community content is available under CC-BY-SA unless otherwise noted.