The Face Bolt depicts "Scorpio", the eighth astrological sign in the Zodiac, and one of the 88 constellations in space.

Counter is based on the Metal System Leone Wheel. It possesses six mane-like protrusions that make up its circumference. The gaps between the six protrusions are too small to provide consistent Smash Attack for an Attack Type customization. Counter showcases fair Smash Attack, but unlike Leone, it lacks the same degree of recoil. This is because the protrusions are more compact and rounded than Leone's. This lower recoil makes it a better, albeit underwhelming, choice for a Defense Type combo.

Defense (D), as the name implies, was the first Defense Type Performance Tip released in the Metal Saga series. Defense is similar to Spike, but is wider. Compared to the Stamina Type Spike, Defense actually has superior Stamina capabilities, with less recoil and more recovery. However, the added friction from the wider tip causes the Beyblade to lose Stamina during recovery. 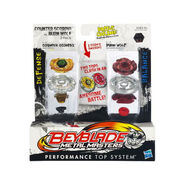