Counterfeit Beyblades are Beyblades that are not manufactured by Hasbro, Takara Tomy, or SonoKong. These Beyblades are commonly composed of cheap plastic, broken parts, wrong or missing parts, and metal parts. Most fake Beyblades have horrible performance, and may damage authentic Beyblades if used together. There are fakes of Stealth Battlers, Electro Beyblades, BeyWheelz, and IR Spin Control Beyblades as well. Fake Beyblades are produced by the following companies:

The launchers and other blading accessories that comes with fake Beyblades will also perform terribly. They have been also known to come with figures, keychains, and even pencils. Dollarama, a Canadian dollar store company, has recently started selling fake Beyblades called "Tornado Clash Tops" under their brand.

There are two importers that import legitimate Beyblades: 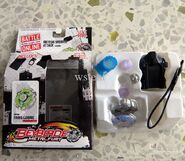 TT does not use Hasbro names, nor do they use that version of the Beyblade Burst logo 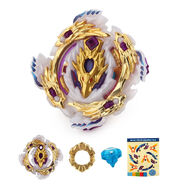 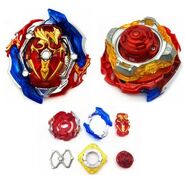 Union Achiles by Flame
Add a photo to this gallery
Retrieved from "https://beyblade.fandom.com/wiki/Counterfeit_Beyblades?oldid=409870"
Community content is available under CC-BY-SA unless otherwise noted.