Cyber Pegasus 100HF is an Attack-Type Beyblade that appears in the anime and manga series, Beyblade: Metal Fusion. It is owned by Sora Akatsuki.

The Face on this Beyblade depicts Pegasus, one of the 88 Constellation in space. In Greek mythology, the Pegasus was described as a winged horse and was the "child" of the Greek god Poseidon. Its Face Bolt depicts Pegasus in a different manner from Storm Pegasus 105RF.

The original release of Pegasus is a blue transparent blue plastic wheel. The edges of the Energy Ring are shaped in a winged like pattern, each ending in a pointed 'head' shape, representing the body form of the Pegasus. This Pegasus energy ring is Translucent white in color.

Cyber is styled like a Hybrid Wheel System version of the Metal System Pegasis with a three-winged design. Its original release is painted a crimson red.

Like the original Pegasis Wheel, it was meant for Attack, notably Force Smash. However, in fact, Cyber is even more useless than Pegasis, which at least enjoyed momentary use in competitive Attack types. This Hybrid Wheel System version is lighter than Pegasis in order to compensate for the Clear Wheel on top of it, and its wings are ever so slightly rounder and not as pronounced, which ruins its potential of achieving decent attacks. Having no use in Stamina nor in Defense because of its Recoil, Cyber is outclassed in all fields. Overall, it should be one of the last choices for Attack.

If you somehow don't have access to competitive Wheels, MF Cyber ____ 145RF is a viable Attack combo, mostly in Hasbro metagames.

This Track is the third lowest track available, but is outclassed in terms of Attack and Stamina by the 85 and 90 Tracks. 100 usually has no problem with floor scrapes, and while it is generally an outclassed part, it is still competitively viable, particularly in Attack customizations where it is able to make good contact with most opposing Beyblades.

HF has a very similar movement speed to that of F, with the main difference being a slight Stamina improvement due to the hole in the middle of the tip. However, this comes with the detriment of even less grip to the stadium floor than F, as well as increased fragility.

Cyber Pegasus 100HF doesn't have many good parts other than the 100 Track which can be obtained in more useful Beyblades like Lightning L-Drago 100HF. There is little to no reason to purchase this Beyblade, aside from collection purposes. 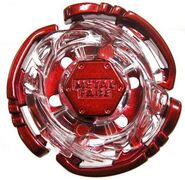 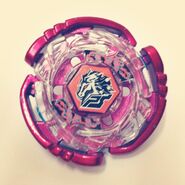 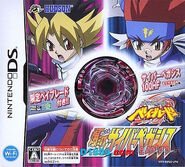 With the DS game. 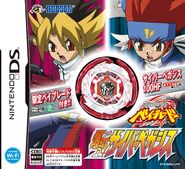 In the DS game promo image.
Add a photo to this gallery

Retrieved from "https://beyblade.fandom.com/wiki/Cyber_Pegasus_100HF?oldid=423745"
Community content is available under CC-BY-SA unless otherwise noted.