Cyclone Herculeo 105F (known in Japan as Tornado Herculeo 105F) is an Attack-Type Beyblade that was released in Japan with the Japanese Tornado Beystadium. It is owned by Ian Garcia.

The Face Bolt depicts the face of the Greek demigod, ''Hercules'' and one of the 88 constellation in space . In Greek myths, Hercules was the son of Zeus and Alcmene, and was driven mad by the goddess Hera (Zeus' wife), and killed his family, he was then required to perform 12 labours as punishment for his actions.

Herculeo has even weight distribution making it a good Energy Ring. It has two lion heads representing the invincible hide of The Nemean Lion, which Hercules killed in one of his labours, on the Energy Ring. The Energy Ring is orange in colour with black designs on the lion heads.

The Cyclone Fusion Wheel has five jagged "wings" with 3 protruding spikes on top of each wing, some people think Cyclone Herculeo 105F is part of the maximum series due to the 5 division of the wheel, but the truth is that it isn't a Maximum Series bey. The total number of spikes is 15. Although it appears to have strong Upper Attack capabilities that it doesn't show it in a standard arena. It is also is able to reach Flame Byxis when used with a 145 spin track due to the "wings" height.

Due to the wings curving in, like the metal wheel Galaxy, at a height of 125 or higher, generally will have weak attack power to anyone with a shorter track than its own. It can, however, have a lot of power when used at 85, 90, 100, and in rare cases, 120 heights. To show the attack power of Cyclone in a stadium, use WF or XF.

Main article: Spin Track - 105
105 is the fourth lowest Spin Track height available, but is outclassed in terms of Attack and Stamina by the 85, 90, and 100 Spin Tracks. 105 has no problem with floor scrapes, but is still an outclassed part and should only be chosen when none of the aforementioned Spin Tracks are available.

Main article: Performance Tip - Flat
Flat (F), as the name implies, has a flat plastic tip, which gives it an offensive movement pattern. Flat has a hard time retaining a flower pattern due to it being made of plastic, which results in it having less grip to the stadium floor than a rubber Performance Tip such as Rubber Flat (RF). 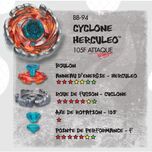