Dark Gargoyle (デスガーゴイル Death Gargoyle) is a Stamina-type Beyblade that belongs to Miguel.

Early on in the anime, this Beyblade featured a SG Flat base but it was later changed to an engine gear base. Takara released the Beyblade with the SG Flat but Hasbro released it with the engine gear.

Blade Base (BB): SG Flat Base

In the anime, this Beyblade used a Semi Flat Engine Gear with the First Clutch Base Metal Driger Ver. Dark Effigy G released by Hasbro contained a customize gear with a Metal Wide Ball weight. 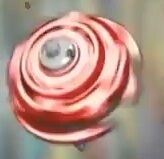 Add a photo to this gallery
Retrieved from "https://beyblade.fandom.com/wiki/Dark_Gargoyle?oldid=477797"
Community content is available under CC-BY-SA unless otherwise noted.