Leone I is a circular Energy Ring with small ridges and an armor-like design. Although its circular shape gives defensive capabilities, Leone I is too light and has poor weight distribution, and thus is outclassed heavily by later releases such as Gasher, Aquario, Bull, etc. The Energy Ring features camoflauge stickers for its detailing.

Dark has twelve spikes facing the clockwise direction. These protrusions are closely packed together with minimal space between each, resulting in an overall round shape. This shape hinders the Fusion Wheel in two ways: its protrusions are not pronounced enough to provide sufficient Smash Attack, while the perimeter is interrupted too frequently for sufficient Stamina. Additionally, its weight is distributed over too large a surface area. There is thus no reason to use Dark in any competitive situation whatsoever.

C145 has three wings which extend outwards, each separately joined onto the underside of the Spin Track. These are free moving, and hence when the Beyblade is launched, these point outwards due to spin velocity. Their free moving nature make them very effective for defensive purposes, as they are able to withstand low hits to the Spin Track without significant spin loss. Furthermore, the Spin Track is significantly heavier than non-gimmicked Tracks such as 145, providing extra weight essential for Defense. The Spin Track subsequently used to be an essential part for Defense customizations. However, with the advent of the Maximum Series, C145 became outclassed especially by the much heavier BD145, which also offers much more protection to the underside. better Attack and defense parts from the 4D era and beyond also render C145 useless completely. 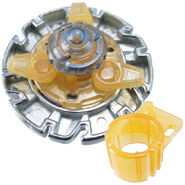