Dark Strata Dragoon is a

Dark Wing, the AR of the Dark Series, has three projected wings and can hold a free-spinning S-AR. The S-AR is identical in shape to the AR since it has three wings that are relative in size to it also. Potentially, the AR could have been used for Smash Attack. The three points of attack on the wings are extended far enough to cause significant damage to the opposing Beyblade with some amount of recoil. However, since S-AR is supposed to spin freely after contact, a source of friction is built and acts as a force that works against the Beyblade as a whole. A solution to this would be to simply use another S-AR, but the problem with that is Dark Wing has an odd number of projections while most of the S-ARs out there has an even number. By doing that, it would cause instability in the Beyblade due to the lack of proper balance.

Customize Sharp would seem like the upgraded version of SG Sharp. It is taller and has the capability to hold a SP. However, having these two changes do not improve on the overall performance of the BB, but instead, makes it worse. The increased height of this BB gives the Beyblade poor balance on its own. In addition to this, using any SP used with the BB only makes it more vulnerable to losing balance. This potentially maybe useful for Wobbling.

The part performs similarly to the Twin Guard found with Blizzard Orthros's SG Bolt Base. 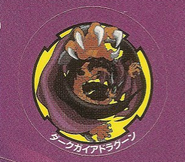 Retrieved from "https://beyblade.fandom.com/wiki/Dark_Strata_Dragoon?oldid=438390"
Community content is available under CC-BY-SA unless otherwise noted.