The Demolition Boys (ボーグ Bōgu) are a team featured in the Original Series, consisting of Beyblade and Beyblade: G-Revolution.

The team sis introduced in the last part of the first season. They would face the Bladebreakers in Russia for the World Championship, as defending champions. However, the Bladebreakers were introduced to Boris and his training facility, at first. Kai, who felt something strange on that facility, decides to investigate the place. There, he recovered his memory and remembered that he was brought up there. He decides to join the Demolition Boys, in order to possess the power of the Black Dranzer.

Before facing the Bladebreakers, they face the All Starz and the White Tigers, who are easily defeated. Kai steals every bit beast from both teams, except for Kevin's Galman.

The team is now determined to win the Beyblade World Championship, so Voltaire and Boris can take over the world, by using the captured bitbeasts of their team's opponents. However, before the finals, Kai challenges the Bladebreakers, and is defeated by them. Now, he is back to the team, and ready to win the championship.

In the first round, Kai battled with Spencer. Spencer wins, and Kai looses his Dranzer. Then, Bryan faces Ray. After a very hard fight, Ray wins, although seriously injured. For the final match, a "new and cyber-improved" Tala faces Tyson. He "chooses to loose" the first round, and then defeats Tyson in the next round, after creating a huge ice mountain around them. In the very last round, Tala reunites all his power in a single attack, but Tyson still manages to defeat him, after speaking to Dragoon. The game is over, all the stolen bit-beasts are returned and the Biovolt Corporation is closed.

During the third season, their team name changed from Demolition to Blitzkrieg Boys, and Ian is no longer with the team. They invite Kai to join them. Kai, who was originally a member of the BBA Revolution, accepts, due to his will to defeat Tyson. Kai and Tala are chosen to be the main bladers of the team.

In the first match, they face the F-Dynasty and easily win. After, they face the BBA Revolution. As Tyson was not chosen by Hiro to fight this time, Kai lets his beyblade out of the stadium on purpose, just as his fight against Daichi starts (and not as coincidence, his beyblade almost hits Hiro). Tala then defeats Kenny, but loses to Daichi. When facing the PPB All Starz, Kai defeats Max, and Tala is quickly knocked out of the stadium by Rick, who later loses to Kai. Their next match is against the Barthez Battalion.

After defeating them, they face the White Tigers. Although Tala easily defeats Lee, Kai has difficulties fighting with Ray, but he wins. For the final Match against the BBA Revolution, Kai challenges Spencer and Bryan to a fight, only to be as tired as Tyson, who had already fought with the F-Dynasty. Tala vs. Daichi match ends up as a tie, and the battle between Kai and Tyson lasts for two chapters of the anime. After a surreal fight in which they create global-scale effects, Tyson barely wins, and both beyblades are severely damaged (but later repaired).

When the BBA is mysteriously brought down and the new professional Beyblade league appears (Beyblade Entertainment Global Association, or BEGA) Tala, Bryan and Spencer attempt to close it down when they realize Boris is the man behind this. They face three amateur boys of the BEGA, and win. Then, Boris dare them to win his blader Garland. He says that if they win, he will close the Association. Garland quickly knocks Spencer and Bryan out of the stadium, and then he defeats Tala. Before a severely injured Tala faints, he reveals that the Barthez Battalion was the testing team for the BEGA, and that they were fortunately defeated, as Tyson showed them the right way to battle. Tala is sent to a hospital, where he lies unconscious. He wakes up in the last episode, to provide the power of Wolborg to Dragoon, so that Tyson can defeat Brooklyn. Only Tala remains for the rest of the series. Spencer and Bryan disappear from the show (expect in the special credits of the final episode in the original Japanese version with Ian) after Tala's devastating loss to Garland. 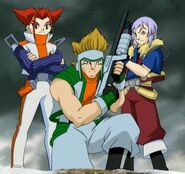 Blitzkrieg Boys in the stands

The Blitzkrieg Boys
Add a photo to this gallery

Retrieved from "https://beyblade.fandom.com/wiki/Demolition_Boys?oldid=306771"
Community content is available under CC-BY-SA unless otherwise noted.