Drago is based on the L-Drago series and looks like a Chinese dragon. It is gold and printed on a dark blue facebolt. It is based on Draco, one of the 88 constellations in space.

The Drago Spirit Shield has 6 blades that are used as a strong shield to block opponents' attacks. It also has a circular and generic design, so you can use it if you have no use of a Spirit Shield in your Beywheelz (one that fully utilizes the Energy Core).

The Doom Energy Core is a small, but thick energy core. Doom is one of the best Energy Cores for Power, although it is a Balanced Core. This is because the treads are in the opposite direction as the plates, thus the compact design. This core also has a little Speed potential.

Fire has 3 strong, claw-like blades that are used as a shield to block opponents' attacks. It is white and orange. It is very flat. This makes it good for speed types as it makes the bey aerodynamic. 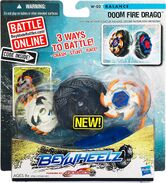 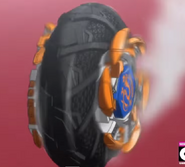 Retrieved from "https://beyblade.fandom.com/wiki/Doom_Fire_Drago?oldid=456371"
Community content is available under CC-BY-SA unless otherwise noted.