The Power Half Hour!
Building The Perfect Beast! (Official Appearance)

Another Powerful Enemy!! The Holy Beasts Are Targeted

Doctor Zagart is the main antagonist in Beyblade: V-Force. He is the father of ZO Zagart and Zeo Zagart and is the man in charge of both Team Zagart and Team Psykick.

Dr. Zagart is a tall man with a large build, long shaggy hair and a beard.

His outfit resembles the ones worn by Team Zagart members and he also sports a purple and white cybernetic goggle with a red lens on his left eye.

He knows what he wants, and how to get it too. He thinks that if he can get the bit-beasts power (Dranzer, Driger, Draciel, and Dragoon) and transfer it into Zeo's circuits, he can turn Zeo into a real boy. He convinces Zeo that he can be turned into a real boy by talking Zeo into his crazy plan, and all he has to do is leave Tyson and the Bladebreakers, and steal their Bit-Beasts.

His eldest son, Zeo, died in an accident many years ago. Overcome with grief, he forced his youngest son to assume the identity of his older brother and to change his name from Leon to Zeo. In the anime, Zeo is an android that Dr. Zagart created to replace his deceased son.

He began the project to extract the bit beasts from the ancient rock. He first hired Alan McKenzie to steal the ancient rock from Judy's lab in NYC. He then proceeds to have Doctor K have the bit-beasts captured but after several failures, he fires her.

He extracts two extraordinary bit-beasts from the rock, Orthros & Cerberus which he then sealed in the two coinciding blades (Orthros & Burning Cerberus). He then chose an expert blader named Gordo to wield Orthros and train Zeo, his android son copy to perfection. He then gave Burning Cerberus to Zeo. He had them both enter the world championships.

After Dr. Zagart has introduced his son to Gordo, he decides to go to the BBA to enter the two Bladers in the final rounds of the World Championships. There he met Mr. Dickenson, the BBA president, for the first time after 30 years. Briefly, they talked about the thing with the stone, until suddenly the Bladebreakers come. Dr. Zagart tells them that Zeo is his son and has now turned into a merciless fighter who wants to win against the Bladebreakers. Before Zagart leaves, he promises the Blader group that they will not recognize Zeo.

He believes that by transferring the power of the four bit beasts to Zeo, Zeo could become human. But as Kenny and Mr. Dickenson pointed out, the bit-beasts may not be able to what Dr. Zagart thinks they will and Zeo may not be able to turn into a real boy from this. They ask Zagart to take Zeo out of the tournament, but he refuses because Zeo is allegedly no longer under his control.

Thanks to Zeo, he managed to collect Dranzer & Draciel, but thanks to Tyson & Dragoon, they were both freed, ensuring that Zagart's plans to make Zeo human are foiled. He then accepts Zeo for who he was & the two live on better terms with the world.

Leon is Dr. Zagart's younger son, whom he trained to be like Zeo after Zeo's death. In the anime, he is actually an android replica of the real Zeo.

Zeo is Dr. Zagart's first son, who was killed in an unfortunate accident.

Mr. Dickenson and Dr. Zagart were once colleagues known for doing bit-beast research. After going their separate ways, their friendship was strained, though it's implied they made amends after Dr. Zagart reformed when Tyson defeated his son in battle. 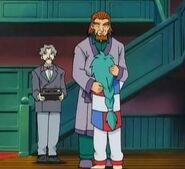 Add a photo to this gallery
Retrieved from "https://beyblade.fandom.com/wiki/Dr._Zagart?oldid=412078"
Community content is available under CC-BY-SA unless otherwise noted.