Draciel G is a Defense-type Beyblade and was Max's sixth Beyblade. It evolves from Draciel V2 and evolves into Draciel MS.

Shield Hammer is an attack ring built for defense. It is made up of two small projections opposite each other, taking the shape of turtle heads. Adjacent from those are two "claws" which are also opposite each other. These are the major components of the attack ring. Each "claw" has 3 diamond-shaped hexagons that lie on top of the claw and stick out just enough to create protrusions. However, these provide no substantial contact points and neglect any offensive capabilities they may been used for. Shield Hammer is rounded enough to provide limited defensive power, but is heavily outclassed by other parts. Furthermore, this beyblade has no attack capabilities otherwise, and being somewhat recoil-prone, is not recommended for serious play.

Draciel G was given a Right-Spin Engine Gear with a Metal Ball tip. This tip is, like most of the beyblade, designed to heighten defense. However, this tip can be self-destructive if the beyblade is knocked off-balance. The metal ball has a cone shape going into the tip, creating a situation where if the beyblade is wobbling or spinning on an axis, the cone will push the beyblade farther onto its side until the BB makes contact with the stadium [<-weirdly worded here. Needs improvement]. For this reason, Metal Ball should not be considered for competitive purposes.

With the final clutch base, Draciel G's engine gear is activated near the end of the battle as the beyblade loses momentum. But Draciel G's base is different from normal Final Clutch Bases: the Draciel G version has metal balls inside of the base. However, these balls do not affect the beyblades performance and therefore are moot. In addition, when the Engine Gear releases the beyblade has already lost so much spin velocity that this usually KO's Draciel G itself. The BB has no protrusion points, and therefore has no defense against lower opponents. For all of these reasons, Final Clutch Base is not recommended.

Wolborg IV Base Compatibility: Final Clutch Base was discovered to be compatible with Wolborg IV's CEW. The Engine Gear and Shell can fit inside of FCB and still perform normally. Although there are no notable differences in the performance of this combination, it should still be considered as an option for customization. 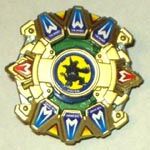 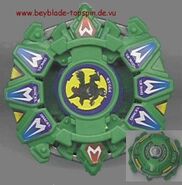 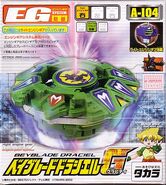 Takara Tomy Box
Add a photo to this gallery

Retrieved from "https://beyblade.fandom.com/wiki/Draciel_G?oldid=446994"
Community content is available under CC-BY-SA unless otherwise noted.