The Race is On

Draciel S is a Defense-type Beyblade and was Max's second Beyblade. It was preceded by Draciel Metal Ball Defenser and was replaced by Draciel F.

The chip depicts Draciel. It has 2 different stickers: Death Draciel and regular Draciel.

Cross Spike’s overall general shape is in the form of a square. It has four projected turtle heads along with multiple flat spikes along it. This Attack Ring has no real use because of its shape and flat spikes that knock it off balance while spinning.

SG Metal Ball is one of the best BB for Defense type customizations. It has a round metal tip which makes it oriented for defense since it has a tendency to remain in the central area of the stadium in order to avoid attacks. The metal tip causes less friction between itself and the stadium which normally allows it to get knocked around in terms of defense, but in this case, its ability to hold up to 2 sets of metal balls prevents this because of the increase in weight.

This BB can hold up to 2 sets of metal balls just like Metal Ball Base (Draciel Metal Ball Defenser) and Fortress Base (Draciel F), however, unlike the other two, it can hold a Heavy Metal Core (Metal Driger) in addition to the 2 sets of metal balls making it the heaviest BB ever at over 20 grams. The combination of the heavy weight on the   metaltip provides one of the best options of defense type BBs to use.

Beyblade Burst Version: a version using the "Burst System" format with a Energy Layer resembling Draciel S, a "Central" disk, and "Press" Performance Tip, Scheduled for a December 2016 release in Japan as a prize bey in a random booster set. 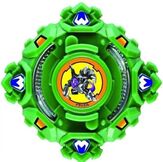