Draciel V2 is a Defense-type Beyblade. It was Max's fifth Beyblade. It evolves from Draciel V and evolves into Draciel G.

Strike Turtle is constructed in an elliptical shape. It is composed of three small "claws" on each side, and a "head" just behind them. The claws are not pronounced enough to provide any strong Smash Attack, and thus is outclassed by the likes of the popular Triple Wing (Trygle), Eight Spiker (Dragoon G), and even Double Wing (Dranzer S). It is also much too large and recoil-prone to do well on Defense or Stamina, though it is also of interesting note that this AR is distinctively average in performance compared to most Draciel ARs.

The Heavy series of Weight Disks has three different versions that were updated as newer Beyblades were released. Chronologically, the first Heavy WD to be released was Six Heavy, followed by Eight Heavy, and finally Ten Heavy. The number before the word “Heavy” on each WD represents the number of sides on each WD (ex. Eight Heavy would have eight sides, making in into an octagon shape).

As the name “Heavy” implies, the Heavy series of WDs is the heaviest available weight disk (including WDs not in the Six/Eight/Ten sided category). Due to the heavy weight and the compactness of that weight, the Heavy weight disks are often used for Compact type combos for the simple reason of increased RPM. When the weight of a Beyblade is focused towards the centre (as opposed to a Wide WD where it is focused around the perimeter), its RPM will increase. This weight is also often put to use in Defense oriented customs, with weight being the primary concern in that type. Ten Heavy is the heaviest out of all of the Heavy weight disks, and generally speaking, is chosen over Six and Eight Heavy when customizing.

An upgraded version of the Right SG.

Fin Tectors, like other Support Parts, can be flipped upside down for usage in different customizations. In Attack Mode, Fin Tectors greatly aid Smash Attack, and are the best choice of SP for this purpose. Alternatively, Fin Tectors can also be used for defensive purposes: when placed in Defense Mode. However, in this mode they are outclassed by many other SP's; most notably Defense Ring (Voltaic Ape). Fin Tectors can be used to moderate effectiveness in Zombie customizations if installed in Defense Mode.

This is a fearsome Smash Attack combo, and can be used very effectively despite its tall height due to the nature of the Fin Tector SP. Another option for this combo would be to use SG Grip Change (Uriel 2) with a Neo Left SG with a HMC (Metal Driger), in its Rubber Flat mode. However, with this modification, the probability of breakage is increased.

Switch Metal Ball base features a tall round tip, which provides minimal Endurance and negligible Attack and Defense. The BB houses 2 unremovable metal balls, that can be set to either an inward or outward position. The only virtue this BB possesses is the ability to hold SP, which is overshadowed by its useless tip shape and tall height. 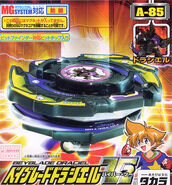 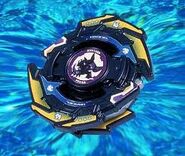 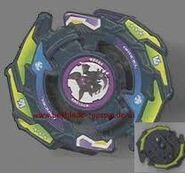 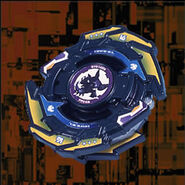 Draciel V2 vs Trygator
Add a photo to this gallery

With a distinctly average Attack Ring, largely pointless and somewhat fragile Support Parts, a useless Blade Base and generic Spin Gear and Weight Disk, Draciel V2 is a disappointing entry in the otherwise excellent V2 series. Unless one is desperate, this Beyblade is only worth buying for collection purposes.

Retrieved from "https://beyblade.fandom.com/wiki/Draciel_V2?oldid=408832"
Community content is available under CC-BY-SA unless otherwise noted.