Darkness at the End of the Tunnel...

Draculor (ドラキュオス Dorakyuosu) is an Anime Exclusive Spin Gear System Beyblade. It is owned by Sanguinex in the Original Series.

Draculor is a dark blue-grey Beyblade, customised with bat motifs. It has a wide bi-symmetrical Attack Ring, with bat wings protruding out of either side. The Weight Disk could be a Six Wide. Like most of the Beyblades featured in Beyblade: 2000, it contains a Right Spin Gear. The Blade Base is standard but has a thin pointed Blade Tip. 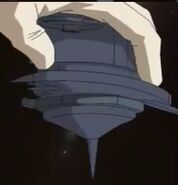 Retrieved from "https://beyblade.fandom.com/wiki/Draculor?oldid=477118"
Community content is available under CC-BY-SA unless otherwise noted.