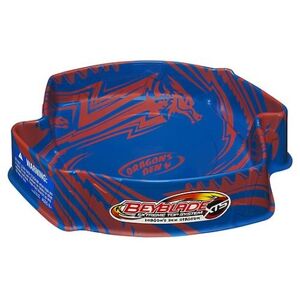 The Dragon's Den Stadium is a Beystadium designed for and released under the Beyblade: Extreme Top System. It is the successor to the Lightning Force Stadium and was released only by Hasbro in late 2011.

As usual, each Hasbro Beystadium has a different colour scheme, and the Dragon's Den Stadium is no exception. Primarily, it is a dark blue with dark red highlights; yet there are designs of Meteo L-Drago's face, opposite of each other, zooming past the Stadium on the Tornado Ridge. Also, with designs on L-Drago's tail around the Beystadium, even into the penalty pockets. In the centre, are the words "DRAGONS DEN" in a swirled manner.

The Dragon's Den Stadium is based on L-Drago, more specifically, Meteo L-Drago LW105LF and is also based on it's predecessor, the Lightning Force Stadium. While retaining almost the exact same design, with the normal Hasbro two-penalty pocket appearance and lighting-bolt's protruding from the Beystadium's outside; there are some things that differ. If one were to look closely, the Dragon's Den Stadium's tornado ridge appears slightly larger than that of the Lighting Force one. Also, the inner ridge of the Dragon's Den feels much harder with a bump in the centre, where the words "DRAGONS DEN" are located.

In performance, the Dragon's Den Stadium performs more-or-less, the same as the Lightning Force Stadium. Two noticeable differences though; because the designs of L-Drago are now longer on the Beystadium's centre, it lets the Beyblades battling in it to circle and roam it much freely. The other, is that it provides much less Stamina for the Beys as a downside. This stadium is a bit better than other stadiums because it has no grooves or craters.

“Turn up” the excitement with this awesome DRAGON’S DEN STADIUM arena. Set your own BEYBLADE tops (sold separately) against each other in head-to-head combat or compete with a friend to determine the ultimate champion. When the high-speed top-spinning action begins, there’s no telling how it will end!

Battle it out between your best tops (sold separately) with this official BEYBLADE stadium!

Retrieved from "https://beyblade.fandom.com/wiki/Dragon%27s_Den_Stadium?oldid=314383"
Community content is available under CC-BY-SA unless otherwise noted.