Dragoon G is an

Attack Type Beyblade and the first entry in the Engine Gear System toyline. It is a

Left Spin Beyblade and sixth model in the "Dragoon" series following the A-69 Dragoon V2. It utilizes the Type 1 Engine Gear System (Instant Release) which equips a Left-Spin Engine Gear Core with an Instant Release Blade Base for an immediate short-term, speed burst upon landing following Launch.

Other features of this Engine Gear top include an Spike-Barrage Attack-style Attack Ring.

This Bit Chip is white and includes an optional sticker. It is the anime depiction of its Bit-Beast, Dragoon over a simplistic yellow and green background with white katakana for Dragoon, "ドラグーン".

Eight Spikes takes the form of four dragon heads followed by slightly smaller fins, for a total of eight contact points. Each one of its eight well-spaced, well-shaped contact points is further enhanced by small spikes, adding Spike Attack to its already prodigious Smash Attack. Despite its hyper-aggressive profile, Eight Spiker is low on Recoil, and is capable of exceptionally clean knock outs at any stage of a battle.

It is therefore one of the best left spin Smash Attack ARs. However, being effective in left spin only comes at a cost: it is unable to make use of Grip Base, the fastest low-height base. Additionally, its lack of any Upper Attack slopes means that it has more trouble outspinning opponents when using bases such as SG Metal Flat 2. Nonetheless, it is an excellent Smash Attack AR, commonly considered the best Left-Spin Smash AR, and is, at the very least, a strong contender for this title.

In this custom, Eight Spiker's consistently powerful Smash Attack is enhanced in a couple ways: by the outwardly focused weight of Wide Defense–which increases movement speed–and by the additional lower Smash Attack provided by the Fin Tectors, which is useful given the slightly tall nature of Customize Grip Base.

Dragoon G is equipped with a Left Engine Gear which has a Metal Semi-Flat tip. Despite the name, however, the tip is flat, only having slight rounding of the edges. This provides aggressive movement and decent Survival. The Engine Gear itself provides a burst of speed (the timing of which depends on the base it is used with). However, the tip isn't fully able to make use of this, and often, the most noticeable effect of activation is self-KO.

Furthermore, it is too tall to hit many opponents, and is limited to Engine-Gear compatible bases, all of which are impractical and/or bulky. Overall, this part has no competitive use.

An Instant Release Base activates an Engine Gear core immediately at the start of battle.

Names In Other Language 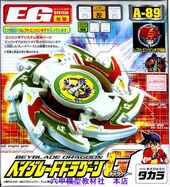 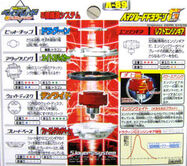 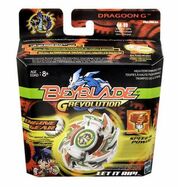 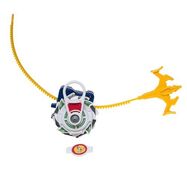 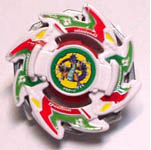 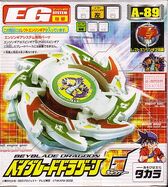 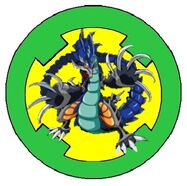 Dragoon G in the anime.

In an ending theme.

Spinning in the air.