The MA-01 Beyblade Dragoon MS Ultimate Version is an Attack-Type Beyblade of the Hard Metal System line, designed as the upgrade version of the A-126 Beyblade Dragoon MS. It was featured briefly in the series finale of Beyblade G-Revolution anime in the original Japanese dub, though it was edited out from North American dub. It was also featured in the final volumes of the manga series and eventually replaced by Dragoon MF in it's finale.

Introduced shortly after the release of the original A-126 Dragoon-Metal Storm, the Dragoon-MS Ultimate Version quickly became a highly sought-after item, attributed most of its popularity to its Spinning Core: the Grip Flat Core (Ultimate Mode). This part alone has become something of hot-commodity in the Beyblade community. The quality and its stellar applications in Attack-type customizations has made this Beyblade an exceedingly rare item to find.

The Bit Protector is constructed entirely of white ABS Caul plastic and The stick decal sheet included with the Starter Set provides two, circular decorative options; one featuring a stylized tattoo of Dragoon's head sitting against a red background, with the words "DRAGOON" and "Beyblade Metal System" (in smaller font) italicized in white beneath it; the other features a dynamic, full-colored illustration of the Bit-Beast Dragoon (different from the original Dragoon MS) against a yellow background.

The Ultimate Attacker features a four-wing design--the signature design element of the Dragoon Beyblades. The Cross Wings ABS Caul is the identical to the A-126 Dragoon-Metal Storm's Metal Attacker; however, the "Left Spike" Metal Frame featured some distinctively different design elements. The four (4) dragon heads aside, the metal frame features four (4) attack spikes with light protrusions for increased impact pressure. Performance-wise, the Ultimate Attacker functions like Metal Attacker, with reliable Smash Attack capability, but the later Beyblade releases have since eclipsed the value of this part with their superior performance levels.

The axis of this RC is a flat tip made of soft red rubber. The material used and its 5mm diameter flat axis gives any Beyblade customization incredible traction and mobility, easily making it popular choice for most HMS-Attack customizations. But these qualities makes it very difficult to use for even the most skilled and seasoned player.

Dragoon MS UV Side view
Add a photo to this gallery 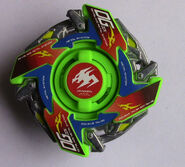 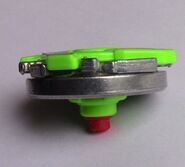 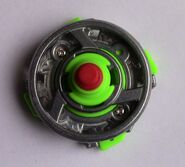 Retrieved from "https://beyblade.fandom.com/wiki/Dragoon_MS_Ultimate_Version?oldid=457570"
Community content is available under CC-BY-SA unless otherwise noted.