Dragoon V (ドラグーンＶ Doragūn V) is a Left-spin Attack-type Beyblade that uses the Magnacore System. It was Tyson's fourth Beyblade. It evolves from Dragoon F and evolves into Dragoon V2.

It was released with a red Neo Reverse Shooter and blue Dragon Winder by Tomy Company LTD. Takara as a Starter Set in Japan on December 2001 for 980円. Hasbro later released it as a Starter sometime during 2003 internationally.

Eigh attacker has eight different protrusions for left spin smash attack but is not that useful for smash.

The weight disk is a Ten Wide, weighing 10 grams. It focuses on momentum of the Bey instead of its defensive qualities. It is the widest Weight Disk.

The first Metal Weight Core in the series due to the tip of Dragoon Victory's base already having a magnet in it. Held in the Neo Left SG's center.

Blade Base: Magne Flat Base

This Blade Base is features a flat-tipped shaft with a built-in Magnecore. The body of the Blade Base features 4 blades for added attack support. The shaft is made from a hard plastic substance that is surprisingly resistant to friction. 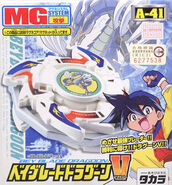 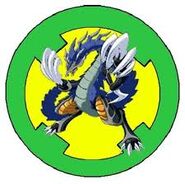 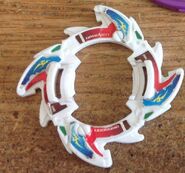 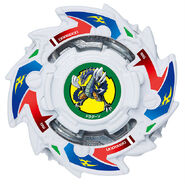 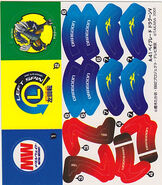 The Bit Chip falling to Earth.

In battle with Kai and Dranzer F. 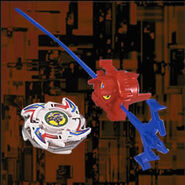