Dranzer F is a Balance Type Beyblade that was Kai's second Beyblade. It was preceded by Dranzer S and was replaced by Dranzer V.

Flame Wing is a multi-attack style ring capable of both Upper Attack and Smash Attack. Unfortunately its ‘Jack of All Trades’ design tends to give it more setbacks than advantages. The sources of its Smash Attack are the two blunt notches on the end of the spikes. Upon contact these notches have the potential to cause significant damage to its opponent in right spin. These protruding notches are also the source for the AR’s main weakness; durability. Like many Smash attackers, Flame Wing is fragile and the notches have a tendency to break off with constant use.

Since the spikes are angled upwards it is capable of Upper Attack. The upper attack however is inferior to a lot of the competition (Upper Dragoon, Triple Tiger). The cause of this is the smaller angle of the slope (around 10 degrees) compared to Upper Dragoon’s 15 degrees (Right Spin). This is an AR that should be used when superior Upper Attack or Smash Attack AR’s are unavailable.

This combination is lightweight, resulting in high speeds. The fast movement can be hard to control, unless a shooting technique such as the Sliding Shoot is employed. Use of this technique improves the chances of performing an early KO.

This customization makes the best of the Upper Attack that Flame Wing has. Its heavier weight and low height allows it to lift the opposing beyblade, instead of being pushed downwards.

The Heavy series of Weight Disks has three different versions that were updated as newer Beyblades were released. Chronologically, the first Heavy WD to be released was Six Heavy, followed by Eight Heavy, and finally Ten Heavy. The number before the word “Heavy” on each WD represents the number of sides on each WD (ex. Eight Heavy would have eight sides, making it into an octagon shape).

As the name “Heavy” implies, the Heavy series of WDs is the heaviest available weight disk (including WDs not in the Six/Eight/Ten sided category). Due to the heavyweight and the compactness of that weight, the Heavyweight disks are often used for Compact type combos for the simple reason of increased RPM. When the weight of a Beyblade is focused towards the center (as opposed to a Wide WD where it is focused around the perimeter), its RPM will increase. This weight is also often put to use in Defense oriented customs, with weight being the primary concern in that type. Ten Heavy is the heaviest out of all of the Heavyweight disks, and generally speaking, is chosen over Six and Eight Heavy when customizing.

SG Triple Change Version can only be used with Flame Change Base. Its casing houses a triple-tipped red plastic piece, which when pulled down allows the player to change between flat, sharp, and semi-flat tips. While this tip adds versatility and acts as a good practice base for newer players; problems emerge. First, while able to use three different tips with three different battle styles; it isn’t able to do any of them very well since the SG is too tall. Second, there is a manufacturing flaw with many of the SG’s that make the triple-tipped plastic piece too loose to stay on one tip. So during a battle, it can get stuck between two of them, significantly reducing endurance and costing the player the match. This unreliability automatically disqualifies it from being a serious choice for many competitive players; but as mentioned before, newer players might find this useful to practice with. Great for testing out the different bases, but useless in battle due to its instability.

Blade Base (BB): Flame Change Base

This base can only be used in conjunction with the SG Triple Change Version. It can also change from 3 different modes. 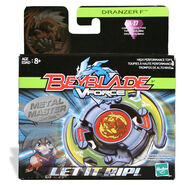 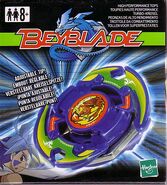 Blade Base : Flame Change Base