Dranzer G is a

Balance Type Beyblade released under the Engine Gear System. This Beyblade is the fifth entry in the "Dranzer" series following the A-81 Dranzer V2. It features a Type 3 Engine Gear System which equips a Right-Spin Engine Gear with a Hit Release Blade Base for an immediate short-term, speed burst when the Clutch Levers are released when the top collides with a wall or another Beyblade top.

This Beyblade was featured in the "Beyblade: G-Revolution" anime, the "Beyblade" manga and various video games as the signature Bey for character Kai Hiwatari before he upgraded to a more advanced model.

The four squares on the side of this blade base closely resemble that of the support parts of Dranzer V2. 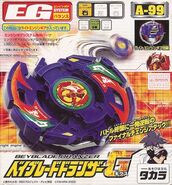 Dranzer G and Draciel G in their special moves