Dranzer GT is a

Balance Type Beyblade released under the Engine Gear System. This Beyblade is the sixth entry in the "Dranzer" series following the A-99 Dranzer G. It utilizes the Type 6 (Hit Reverse) Engine Gear System which equips an unique Reversing Right Engine Gear Core with a Hit Release Blade Base that allows the Beyblade top to spin in the opposite direction to its normal spin and launching a surprise counterattack on the enemy Bey.

This Beyblade was featured in the "Beyblade: G-Revolution" anime and the "Beyblade" manga as the signature Bey for the character Kai Hiwatari for a time.

Similar in design to the classic Master Dragoon, but with more symmetry. Although this means the upper attack slope is not as effective in right spin, it allows the attack ring to be used equally for both left and right spin.

The attack ring also bears a resemblance to Batranzer from Beyblade V-Force, although it has slopes.

Spin Gear spins in the left direction to allow Dranzer GT to attack in a zig-zag pattern under ideal conditions. As a result, it is best used with the supplied blade base to prevent a significant loss of spin. However, it is even worse than most other Engine Gear's as it makes the blade lose vital spin velocity for a mediocre reverse attack. It is best avoided.

This Blade Base is exclusively bundled with Dranzer GT. The clutch activates the reverse engine gear in the middle of the battle unlike the Instant Release (First Clutch), however does not activate as late as the Hit Release (Final Clutch). It prevents a significant loss of spin suffered from the reverse gear.

This is a detachable part for the customizable Engine Gears. It features a semi-flat, metal tip that functions well with

Kai's Beyblade Dranzer Gigs Turbo, can use a reverse spin attack with its Engine Gear called Reverse Engine Gear. The Engine Gear goes in the opposite direction of the rest of the spinning top. This can be seen when Tyson and Kai are battling each other in Let The Games Begin... Again. 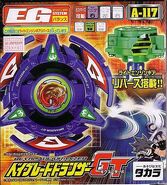 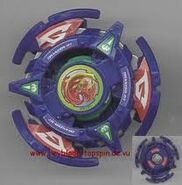 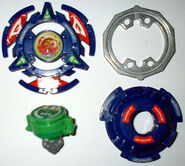