This article is about the original Spin Gear System release. For the Burst System remake, see Dranzer Spiral Spread Trans.

Dranzer S or Dranzer Spiral, is the first Beyblade in the Dranzer series. It was Kai's first Beyblade. It was replaced by Dranzer F.

This Attack Ring has two wings on either side that are designed for Smash Attack in left spin. Unfortunately, the Attack Ring is outclassed by others such as Eight Spiker (Dragoon G) and produces too much recoil for competitive use.

The Balance WD has a weight which is between that of Wide Weight Disks and Heavy Weight Disks. It's mass is distributed well, and in theory would be used for both Defense and Stamina purposes. That being said, there is numerous other options which are better for those types, and even Balance types which also in theory would benefit from this type of WD have much better choices (such as Ten Heavy). Ten Balance is the heaviest out of all of the Balance weight disks, and generally speaking, is chosen over Six and Eight Balance when Customizing.

This Spin Gear has casings that hold a metal sharp tip and a metal bearing inside. The casings can also be used to hold Driger F's tip inside and allows the tip to be used in many smash attack customizations.

This customization uses the casings to their fullest. The metal flat tip increases movement. It is best when used with the Sliding Shoot since the the tip makes the Beyblade very hard to control otherwise.

Blade Base (BB): Spiral Change Base

This blade base can hold Right SG (Free Shaft Version), as well as un-gimmicked Spin Gears and Neo Spin Gears. When used with Right SG (Free Shaft Version), the bottom of the base can be pushed in and turned before battle to have either a metal sharp tip or plastic flat tip. Spiral Change Base has great life-after-death ability when used in the plastic flat tip mode and can be used instead of a bearing tip and is able to tie or beat one, even when used in the opposite spin direction, though it can be very hard to control and has poor Defense (albeit better than its Endurance Mode), Weak Shooting can aid both significantly, although it is still a risky choice.

Use in Life After Death Customization 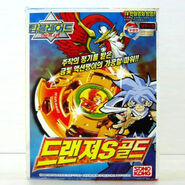 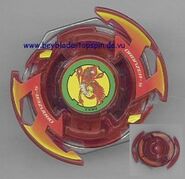