Dranzer V is a Balance-type Beyblade that uses the Magnacore System. It was Kai's third Beyblade. It is the evolution of Dranzer F. It evolves into Dranzer V2.

This AR is descent for smash attack. It is very similar to Master Dranzer.

Blade Base (BB):Volcano Change Base

This blade base can change from a sharp tip to a flat tip. This BB is good for balance types, and in some occasions, attack types. However, it has been outclassed. 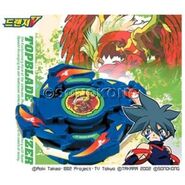 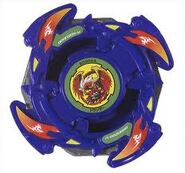 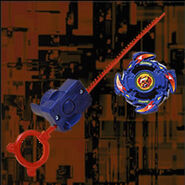 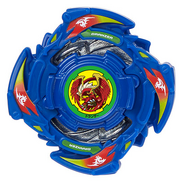 While it doesn't excel in any particular field, Dranzer V is a very well rounded Beyblade, with a fairly useful Weight Disk, passable Attack Ring, and a Blade Base which offers solid performance in Attack and Survival and most notably, impressive ease of use. These factors combine to create a Beyblade that is not only decent out of the box, but quite simple to improve, making it a great choice for Bladers who are new to Plastic Beyblades. Lastly, the unique Spin Gear is interesting if not particularly useful, and Neo Spin Gear Casings are always a positive inclusion. While not a must have, Dranzer V is a useful Beyblade to own, especially for beginners.