Driger F is a

Balance Type Beyblade released under the Spin Gear System. This Beyblade is also the second Beyblade in the Driger series following the #35 Driger S. This Beyblade was designed with a special Gimmick Spin Gear featuring a free-spinning shaft designed to work in conjunction with an automatic clutch Blade Base for in-battle performance mode changes.

This Beyblade was featured in the "Beyblade" and "Beyblade: V-Force" animes as well as the "Beyblade" manga as the signature Bey for character Ray Kon before he upgraded to a more advanced model.

Cross Fang depicts four symmetrical tigers. This Attack Ring sees use mainly in Right-spin Smash Attack customizations, which is provided by the protrusions acting as the tigers' bodies. However, these contact points do not protrude far enough from the AR and are not sharp enough to provide a powerful attack. Cross Fang can't be considered a competitive Attack Ring.

This Spin Gear features a metal shaft supported by a metal bearing that ends with a Metal Flat tip. The free-spinning shaft helps reduce the loss of spin when the Beyblade equipped with this part is hit by an opposing top. Customizations using this part, which were tested by WBO member Galaxy in 2011, had proven that the tip is particularly aggressive and hard to control, making it very useful for Attack-Type combos.

This Blade Base can only hold the Right SG (Full Auto Clutch Ver.); this base has an increased weight respect to the others,due to the fact that it contains two springs blocked by two metal clips. Full Auto Clutch Base is very unbalanced, and can not be used for competitive purposes. 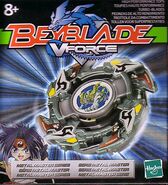 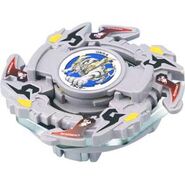 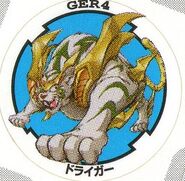 Name in Other Languages

Retrieved from "https://beyblade.fandom.com/wiki/Driger_F?oldid=421458"
Community content is available under CC-BY-SA unless otherwise noted.