Driger S is a

Balance Type Beyblade released under the Spin Gear System and is the first Beyblade in the Driger series. Driger S was designed with a Blade Base equipped with the Metal Change Tip, a metal tip with a wide surface and a semi-exposed tip designed to change the performance modes of the Beyblade top as it moves from one area of the stadium to another.

This Beyblade was featured in the "Beyblade" anime as well as the "Beyblade" manga as the signature Bey for character Ray Kon before he upgraded to a more advanced model.

Using Tiger Defenser, you can create a strong survival combo. This AR does not take many heavy hits in battle. Here is an example:

The small projections on Tiger Defenser can steal spin from the opponent. The round shape will not take recoil, so the Beyblade will have higher defense. However, if you want a Left-Spin survival combo with better defense ability, Galeon's War Lion is a better choice.

Use in Compact Customization

Because of Tiger Defenser's small size and high spin velocity, it is one of the most popular AR choices for compact combos. Here is an example:

As you can see, this Beyblade is not very different from an uncustomized Driger S. However, with just a few simple improvements, Driger S's strongest attributes can be exploited even further.

Availability in Hasbro Jumping Base

As the name “Heavy” implies, the Heavy series of WDs is the heaviest available weight disk (including WDs not in the Six/Eight/Ten sided category). Due to the heavy weight and the compactness of that weight, the Heavy weight disks are often used for Compact type combos for the simple reason of increased RPM. When the weight of a Beyblade is focused towards the centre (as opposed to a Wide WD where it is focused around the perimeter), its RPM will increase. This weight is also often put to use in Defense oriented customs, with weight being the primary concern in that type. Ten Heavy is the heaviest out of all of the Heavy weight disks, and generally speaking, is chosen over Six and Eight Heavy when customizing.

Blade Base (BB): Metal Change Base

The BB of Driger S, Metal Change Base, has an interesting function. The tip is sharpest at its direct center, but flat on most of the tip. Because of this, you can use this tip as either an attack tip or survival tip.

When a Beyblade donning Metal Change Base is hit in battle while in survival mode, it will often tilt and shift into attack mode. This will allow the Beyblade to deliver a returning attack to the opposing Beyblade before regaining its balance and shifting back into survival mode.

Sliding Shoot causes the Beyblade to tilt when it is shot. Because of this, Metal Change Base will create a movement that sweeps through the center of the Beystadium, shifting from attack to survival mode constantly.

Use in Compact Customization

Metal Change Base is round with a low diameter and a metal tip that has balanced performance. Because of this, it is the perfect choice for a compact combo. Note: This is the same compact combo that was listed for Tiger Defenser.

As you can see, this Beyblade is not very different from an uncustomized Driger S. However, with just a few simple improvements, Driger S's strongest attributes can be exploited even further.

It is illegal to exchange the tip of Metal Change Base with any other tip.

This Beyblade is a case of an older model being useful all over. Both Tiger Defenser and Metal Change Base are indispensable parts with many uses. The Phantom Force re-release was a godsend for people who missed this Beyblade the first time around. You can practice every shooting technique with this Beyblade, and many Beyblades can be defeated by Driger S with little or no customization. Every blader should own multiples of this blade.

Beyblade Burst Version: a version of Driger S using the "Burst System" format with a Energy Layer closely resembling the design of Driger S, a "Heavy" disk, and "Fusion" driver, Scheduled for an October 2016 release in Japan as a prize Beyblade in a random booster set.

Beyblade Burst Gold Version: a limited Gold Version of "Driger S Heavy Fusion" only 100 will be available in Japan late 2016. 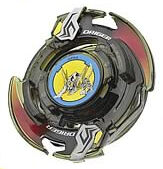