The Drop Rock appears for the first time in Beyblade G-Revolution episode 7 "Take your best shot" and is the special move by Rock Bison used by Rick Anderson. Rick started the move for the first time in the fight against Michael. This move is very strong and extremely effective! It covers Rock Bison in bits of rock which forms a massive rock that drops on the opponent like a meteor. 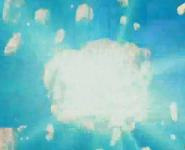 Add a photo to this gallery
Retrieved from "https://beyblade.fandom.com/wiki/Drop_Rock?oldid=433223"
Community content is available under CC-BY-SA unless otherwise noted.