The Child of Nemesis

Duo Uranus 230WD is a Stamina Type Beyblade that appears in the Beyblade: Metal Fury anime. It was released in the BB-121 Beyblade Ultimate DX Set on November 19, 2011 in Japan. It is owned by Herschel.

The Face Bolt ostensibly depicts "Uranus", the Greek god of the sky. The design features a split masked face, which appears torn on the left side, revealing a skull underneath. The division of the face into two separate halves references the "duality" theme of Duo Uranus 230WD. There are six dots on the forehead, representing Uranus' first six sons and six daughters, the Titans.

Ice-Titan is designed in a spiky, vortex-like manner that accentuates the design of the Duo Fusion Wheel. Ice-Titan has two pentagonal shapes above and below its centre, and the stickers on it represent wings slightly shaped into faces, where one is more diabolical-looking with jagged feathers, and the other is more heroic-looking, with smoothly curved lines. Ice-Titan is notable for being the smallest Energy Ring released in the Metal Saga toyline, being only 36 millimeters in diameter at its widest points. Ice-Titan is also one of the lightest Energy Rings, being only 0.2 grams heavier than Gemios, the lightest Energy Ring. Due to this, Ice-Titan is generally not considered a competitive part. 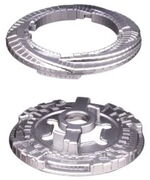 Duo is formed of series of spirals seemingly emitted from the centre, as if they were wind gushes, again linking back to the wind theme of the Beyblade as a whole. This 4D Metal Wheel is made up of two components: The upper half is the Metal Frame—which is the basis of the mode change—and the Core, which supports the Metal Frame, as well as denoting the mode and playing a small part therein.

Duo's gimmick relates to balance: in Stamina Mode, it is well balanced, and in Attack Mode, it is greatly off-balance. This mode change is done by rotating the Metal Frame 90 degrees clockwise, or 90 degrees counter-clockwise. Doing so, however, requires disassembly of the Beyblade.

230 is the tallest Spin Track released in the Metal Saga toyline. It was first released with Flame Byxis 230WD as part of the Maximum Series, and was advertised as the "Maximum Height" for Spin Tracks. 230 has six indents near the top that sharpen downwards to the middle of the Spin Track. 230 is rounder and thicker than other regular Spin Tracks with no gimmicks, in order to protect it structurally when it comes into contact with opposing Fusion Wheels. Its round and smooth shape results in significantly less recoil than if it were based on the traditional hexagonal Spin Track shape.

Since 230 is so tall, it can wobble at great lengths for extra Stamina, defeating various Stamina Type customizations with lower Tracks. From a defensive viewpoint, 230 uses its height as an advantage to protect itself from low incoming Attacks, by protecting the Fusion Wheel from major contact while using the reinforced plastic to absorb most of the shock. As a result of this, 230 can defeat most low Attack customizations under the 120 height when paired with other top-tier Defense parts.

230 also has some notable weaknesses, however. As a Defense Type Spin Track, 230 is extremely susceptible to tall Spin Track opposite spin Attack Type customizations. Additionally, 230 is outclassed by the likes of Triple Height 170 (TH170), which offers the same height and also the versatility of the height change gimmick.

Wide Defense (WD), as its name implies, is the widest (along with Wave Wide Defense (W2D) and Eternal Wide Defense (EWD)) of the "Defense" series of Performance Tips (D, SD, WD, W2D, EWD and PD). The wide surface area prevents the Beyblade from being knocked over easily. In addition, Wide Defense is able to wobble at a larger angle and for a longer period of time than Defense. However, low spin rate is created towards the end of a battle because in the process of wobbling at such a large angle, more friction is made with the stadium floor, thus decreasing its stamina. Although its name suggests defensive characteristics, Wide Defense does not possess any inherent defensive qualities. Wide Defense finds most use in providing increased stamina in combos.