F-Dynasty (Fサングレ F-Sangure) are a team featured in the Original Series, consisting of Beyblade: G-Revolution.

The F-Dynasty team is a beyblading team that represents Spain. They are twins who who were born and raised in a circus, and specialize in a tag-team beyblading style. Although they prefer to Beyblade in tag team matches, they are both powerful beybladers on their own. However, the pair are not particularly diverse in their independent battles; they tend to use the same tactics as each other. As a consquence, once one is defeated the defeat of the other easily follows in the net match. They only appear in the G-Revolution season. They started beyblading after meeting Romero who introduced the sport to them. They participate in the world championships, where they are first introduced, and come in later to support the G Revolutions in the BBA vs. BEGA tournament.

The F-Dynasty first appeared on the opening ceremony of the World Championship. Their first match was against the Blitzkrieg Boys, who won easily. They also lost their next match against the PPB All Starz.

When in Spain, they are seen doing some acrobatic arts with beyblades on the streets, which provide them much applause. During one of these presentations, Lee from the White Tiger X says he is not impressed, and when they challenge him to a bey-battle, he accepts. He did not recognize them because of their masks. During the fight, he goes crazy, due to his recent nightmares involving Ray's pressure on him, and loses the battle. Later before the White Tiger X team's next battle, Julia and Raul reveal that the two performers are actually F-Dynasty. They propose a tag match, and Ray and Lee accept. During the fight, Lee goes crazy again and the F-Dynasty team wins its first battle.

Their next match, was against BBA Revolution. Tyson dares them to fight a tag match. He does that in order to show everyone that he and Daichi are ready for anything. However, the pressure of being a World Champion overtakes him and the F-Dynasty wins once again.

For their last match against the Barthez Battalion (no longer controlled by Commander Barthez), Raul asks Julia to try to fight on his own. He wants to prove to everyone that he is able to fight alone, without his sister's help. Julia reluctantly accepts it. She is the first to fight, and defeats Miguel with ease. Raul then faces Mathilda, who is using a beyblade made with parts of other beyblades. He seems to have difficulties during his match, but Julia tells him that she wouldn’t be what she is without him. Raul then finds energy to win the battle.

The Blitzkrieg Boys are already classified to the final, but the F-Dynasty and the BBA Revolution teams must fight first to see who will go because each of them are tied for second place along with having less points than the Blitzkrieg Boys. Tyson and Daichi challenge Raul and Julia live on television for a tag match. They claim to be doing it to prove to everyone that they are able to win even working together. Before the fight begins, Raul and Julia are seen at the circus, with their family. During the match, Raul and Julia try to stay in the game in order to not disappoint their circus' friends, who are cheering in the audience. However, Tyson and Daichi didn't want to be defeated, as shown when they use a clever strategy to win the game. Even though they are now out of the championship, Raul and Julia are warmly congratulated by their circus' friends and the audience. They make third place in the championships.

During the BEGA arc, F-Dynasty would appear again to support the G-Revolutions team as they fight against the BEGA League.

During the end of the series slide show, Raul and Julia are seen in the middle of a tag-team battle with King and Queen, while Romero is working in Kenny's family restaurant.

The Manga version of Beyblade introduces a slightly different F-Dynasty. Raul and Julia come from "the noble Fernandez family", instead of a circus, and Raul is given more attention than Julia, being far more confident and arrogant than in the anime version (although he is still the 'younger brother').

Their grandfather, Pablo Fernandez (or old man Pablo), who is the best Beyblade craftsman in the world, and whose Beyblades can even shatter steel. He built F-Dynasty's Beyblades and also Tyson's (at a certain point of the story), but he only makes them for those he considers worthy.

They made their first appearance in Volume 10, representing Europe, region A. 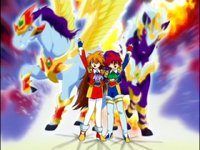 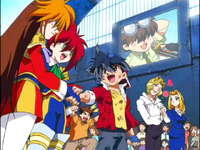 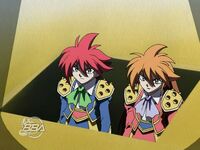 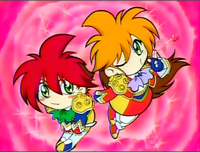 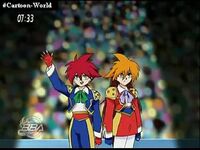